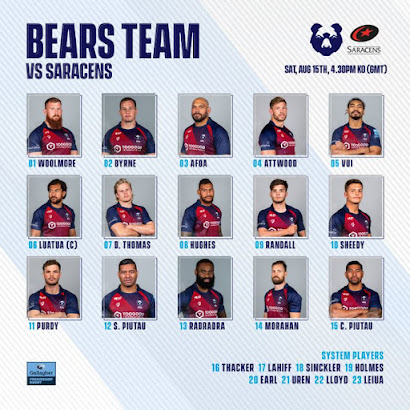 The first bad news was Stade Francais - 25 tested positive?  Then there was Munster - maybe "just the one" in their academy, but still a lot closer to home.  But then I found out a match in NEW ZEALAND of all places was getting called off for COVID19?  PANIC STATIONS!!!!

Personally there was a silver lining to that last bit as I had committed to cover the Blues v Crusaders this weekend as part of my "warmup writeup" series before the interpros start up, so the cancellation has spared me a 4am wakeup call on Sunday morning.  But still I have to keep fingers, toes, eyes and everything else crossed that after all this waiting, Leinster Rugby will be able to safely return next weekend.

So what to do - take this weekend off?  Nah, already did that when the Blues had a bye week in the last round.  I could have stayed in the southern hemisphere by switching to the other Super Rugby Aotearoa clash this weekend, the Highlanders v Hurricanes, or even switched over to the Australian version, but with the Premiership resuming, it seemed to be good opportunity to have a look at Leinster's Champions Cup quarterfinal opposition Saracens instead.

In their first match after the break they travel to Ashton Gate to play Ian Madigan's former club Bristol Bears, who under Pat Lam are pushing hard for a top four spot and as you can see above, have an impressive squad including a pair of Pietaus, Nathan Hughes, John Afoa as well as another name familiar to Leinster fans, Bryan Byrne.

But like I say, I'm more interested in the reigning European champions.  Since they have a bit of work to do to make up the 83 point gap between themselves and the 11th place Leicester Tigers, they find themselves in the crazy position of being able to turn their sights completely on their September 19 visit to the Aviva Stadium, as that is the only major trophy they have to play for until 2022.

And for a club resigned to play in the Championship next season, this isn't a bad lineup.  Perhaps there's no Owen Farrell, but Alex Goode has been doing well at 10 himself for them and having just committed to a new contract he'll be keen to hit the ground running.  Then there's the small matter of Itoje, a pair of Vunipolas, Sean Maitland...not to mention the overall standard on which Mark McCall as insisted over the years to great success.

I have to admit I haven't been watching a whole lot of Premiership Rugby in the past couple of years so this might be something of an eye-opener for me, but judging by the overall talent on show this could well be the tie of the weekend.  The bookies have a home win by seven points - I'm going to be a contrarian and say Sarries will prevail by the same margin.

Whatever happens covering this match will help me get through what I really hope will be the final weekend before the "real" rugby worth harpin' on returns.  If you look out for my writeup on Monday, maybe it will be a good way to help you pass the time as well.  JLP