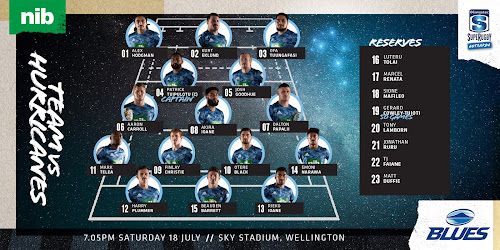 Had a great chat with John Keenan from The Rugby Gods Podcast earlier in the week where we talked about the state of play in Super Rugby Aotearoa after the first half of the competition.  He pointed out that while last weekend's Crusaders v Blues clash, which I featured for my first post-lockdown writeup last Monday, had a large bearing on the race for the first 2 places on the table, this Round 6 pairing in Wellington on Saturday is probably just as important.
The Crusaders' ability to secure bonus points in their first four matches has given them a 6-point lead at the halfway mark, and this means that unless they slip up they could have 1st place wrapped up before their final round trip to Auckland.  But first, to stay in touch themselves, the Blues must also be perfect between now and then and in the 3rd-placed Hurricanes they have a team looking to move up the 'ladder' themselves.
In defeating the Highlanders last weekend, the Wellington-based franchise got off to a solid start with two impressive first half tries but in what was a low-scoring encounter for Super Rugby, they might ask themselves if they left a try bonus point behind.  They'll still go into this one with some confidence especially as they have their inspirational co-captain Dane Coles back in the starting lineup.
As for the Blues, they go into this one without some key players - not only is Dan Carter still unable to make his debut but the likes of Caleb Clarke and Hoskins Sotutu who both played big roles in their first three wins are unavailable this time around so their depth is going to be put to the test.
Still, in the back row in particular, Papalii and Akira Ioane are more than capable of picking up the slack so from what I've seen I'll be expecting a competitive outing from the Blues' pack, which means this contest could well come down to the Battle of the Barretts to see who comes out on top.
Jordie threw a phenomenal pass to set up his team's 2nd try last time out, while the day before I thought Beauden was disappointing by his standards on a day when his side really needed him.  How much of a foothold either can make in their team's attack should prove the difference when it comes to finding the tryline.
The bookies aren't showing much daylight between these two so we should be in for a cracker.  They have the Canes by just the one point, but since the Blues are "my team" for the foreseeable future I suppose I should really back them and although outhalf Otere Black made a critical error last time allowing his conversion to be charged down, he has been steady with pretty much all his other placekicks so with the penalty counts seeming to get higher as the tournament progresses, his three-pointers might be enough to edge it so I'm going for an away win by 3-5 points.
If this match has even a fraction of the excitement from last Saturday morning, it will be worth forgoing another line-in!  JLP
#COY(OTHER)BIB
Hurricanes: Jordie Barrett, Kobus van Wyk, Peter Umaga-Jensen, Ngani Laumape, Ben Lam, Jackson Garden-Bachop, TJ Perenara (cc), Ardie Savea, Du’Plessis Kirifi, Reed Prinsep, Scott Scrafton, James Blackwell, Tyrel Lomax, Dane Cole, Ben May. Reserves: Asafo Aumua, Fraser Armstrong, Alex Fidow, Isaia Walker-Leawere, Vaea Fifita, Jamie Booth, Billy Proctor, Wes Goosen.
Referee: Ben O’Keeffe
AR1: Brendon Pickerill
AR2 : Paul Williams
TMO: James Doleman
Super Rugby Aotearoa - Round 6
Saturday, July 18, 2020
Kickoff : 8:05am (Irish time)
Sky Stadium, Wellington
Sky Sports Main Event
Sky Sports Action
Click here for a full list of rugby on Irish TV
at July 17, 2020