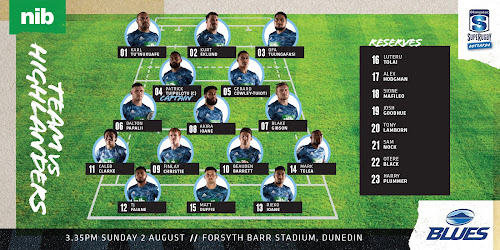 "Semi-Final mindset"
That was an interesting message added to the publication of the Blues' starting lineup on their twitter account, especially when unlike the Australian equivalent, Super Rugby Aotearoa is being run with a knockout-free format.  But after the Crusaders' loss to the Hurricanes in Round 7, it left the competition wide open.  Kind of.
Whatever about the permutations after this weekend, one thing the Blues know going into it is that if they defeat the Highlanders in Dunedin on Sunday, they're still mathematically in with a shout of claiming the title in what is actually the last match of the tournament so yes, the semifinal comparison checks out.
For me, the biggest test they face for the remaining competition is the ability to hold on a lead.  I harped on it in my writeup of their win over the Chiefs last time out, but actually it has been a feature all throughout their campaign so far, including the reverse fixture against these very same Highlanders in Round 3 where they prevailed by 3 points having again coughed up an early advantage.
Beauden Barrett retains the 10 jersey this week, though once again I fully expect him to make a scheduled switch to 15 in minute 50-60 handing the creative reins over to Otere Black.  And if an early lead needs to be established he still has plenty of potent options around him like Reiko Ioane and Caleb Clarke to execute some more impressive plays off of set pieces.
However it's in the forwards where they will probably need to front up.  Despite going a few rounds with the versatile young number 8 Hoskins Sotutu, they have gotten impressive displays from pretty much everyone else in the meantime.  Here as a nod to my lifetime menbership of the Front Row Union I'll give a nod to their starting trio of Karl Tu’inukuafe, Kurt Eklund & Ofa Tuungafasi, all of whom did well last time out.
But what of their hosts?  Well the schedule might have them 2nd from bottom with only two victories over the Chiefs below them so far, but that is deceptive from what I've seen.  They have also picked up a couple of losing bonus points along the way, including that one in Auckland, and they know how to stay in a contest.
Much of their fortunes will depend on the return from injury of All Black prospect 10 Josh Ioane, who starts as Mitch Hunt does a "reverse Beauden" by dropping to full back.  His partnership with Aaron Smith will be key and it will probably need to click early as the Blues like to come fast out of the gate and tend to have a stubborn defensive cordon.
For all the Blues power in their pack, the Otago based franchise have some too in the likes of Peri Peri Parkinson and Shannon Frizell, and both sets will be keen to keep the penalty count down.
The bookies are expecting an away win by 5 points.  On form, I'd be inclined to agree, but for matches like this we should probably expect the unexpected so I'm going to back Beauden to produce the kind of dominant 80-minute display the Blues fans will have come to expect from him since his arrival.  If he gets into his zone and their defence stays strong, they could prevail by 10-12pts, maybe even with a bonus point on the cards.
Once again my alarm for Sunday morning has already been set on my phone.  Chances are I can manage the crazy early start two weeks in a row.  Let's just say you'll know by my Twitter account whether I was succesful!  Here's to a match that will make it all worthwhile.  JLP
#COY(OTHER)BIB
Highlanders: 1. Ayden Johnstone 2. Ash Dixon (cc) 3. Jeff Thwaites 4. Pari Pari Parkinson 5. Jack Whetton 6. Shannon Frizell 7. Dillon Hunt 8. Marino Mikaele-Tu’u 9. Aaron Smith (cc) 10. Josh Ioane 11. Scott Gregory 12. Patelesio Tomkinson 13. Michael Collins 14. Josh McKay 15. Mitch Hunt.
Reserves: 16. Liam Coltman 17. Ethan De Groot 18. Siate Tokolahi 19. Manaaki Selby-Rickit 20. Jesse Parete 21. Folau Fakatava 22. Bryn Gatland 23. Jona Nareki
Super Rugby Aotearoa - Week 8
Sunday, August 2, 2020
Kickoff : 4:35am (Irish Time)
Forsyth Barr Stadium, Dunedin
Referee: Mike Fraser
AR1: James Doleman
AR2: Brendon Pickerill
TMO: Chris Hart
Sky Sports Action
Click here for a full list of upcoming rugby on Irish TV
at July 31, 2020