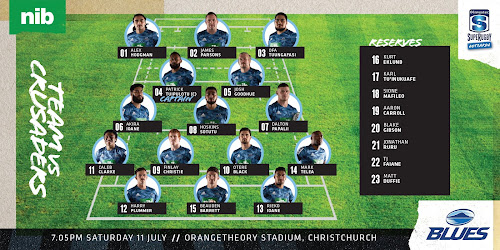 They all sound pretty nasty without context, yet they make perfect sense when you tack on the words "...to harp on actual rugby again" to each one.  For all the features we do here at Harpin Manor to keep the site going, the match previews and writeups are paramount.  It's the 80 minutes of rugby that our favourite teams play each weekend which keep us going, and we can't wait to have them back.

So what with the interpros not set to resume until the end of August, we've decided to get in some "pre-season training" of our own by adopting a team from Super Rugby Aotearoa and following their progress to the end of the competition.  And given we're big fans of one lot of boys in blue, what better team to select than the Blues from Auckland, and what better time to start than this coming weekend as they travel to face the 10-time champion Crusaders.

The Blues haven't won Super Rugby since 2003, and haven't so much as reached the final four since 2011.  But this year, they look like things are falling into place to make a serious run at some silverware.  Of course adding names like Beauden Barret and Dan Carter to your lineup won't hurt in that regard, but having watched all of their performances from their 100% start (see the 80-word reviews below), I can assure you that those two are but a small part of their success; in fact Carter hasn't even crossed the whitewash for them yet.

Make no mistake, this is a quality team from 1 to 15 whomever they have out there, and although the Crusaders have the championship-winning experience and even more points on the table from their  own perfect start to the campaign, Leon McDonald's men are more than a match for them at virtually every position.

Barrett himself is slotting in at full back and we all know the damage he can do straightening his line from deep; his head to head with David Havili will be fascinating.  But if you think for a second that this leaves the Blues vulnerable at outhalf, think again.  Otere Black has been excellent in every aspect of his game and I wouldn't bet against him outshining Richie Mo'unga on Saturday.

Then on the wing you have superstars squaring off on either side of the park; George Bridge v Mark Telea will be worth following but both Caleb Clarke and Sevu Reece provided devastating finishes against the Highlanders in rounds 3 and 4 respectively.  And there's another familiar All Black winger's name in the lineup, only Reiko Ioane now plays at 13 and looks very comfortable there.

It doesn't end when you get to the pack.  Blues skipper Patrick Tuipulotu has led by example in every way so far and I'm sure Sam Whitelock knows he'll be up against it.  But arguably the biggest string they have to their bow is at number 8.

On the off chance you haven't heard the name Hoskins Sotutu before now, prepare yourself because this guy seems to have what it takes to go far.  To date in this competition I've seen him show quality in carrying, tackling, jackling, finishing, physicality, even tactical kicking.  And it's not as though his fellow back rowers Akira Ioane and Dalton Papalii are too shabby either - the latter in particular has shown a knock for finding the tryline. 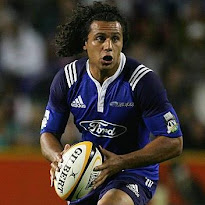 The bookies have the home side to win by 8, and that seems like a pretty good bet.  However, although the Highlanders ended up losing by 20 last week to the Saders, I think the Blues might want to borrow a leaf from their playbook.  IMO the scoreline didn't reflect the work put in by the Otago-based lads - they took a lot of risks at the breakdown and while they may have shipped 13 penalties which didn't help them on the scoreboard, I reckon Isa Nacewa's former club may have to run a similar gauntlet if they are to keep this one close.

And keeping the score close enough for a 4-1 split in points would definitely be a decent result for the Blues' point of view.  It's only the halfway point in the competition and if they can stay within touching distance between now and the final round when these sides meet again in Auckland on August 16, it could be a grandstand finish.

So when it comes to my own prediction, well since I'm now a "fan" I should be backing my boys to win, but I have to say I can't ignore the fact that the Crusaders have a lot more miles on the clock when it comes to games like this.  Plus they have some match-winning talent on the bench in Will Jordan - I doubt even Leinster would be able to resist starting someone like him (although we do have a quality young back three Jordan of our own).

I'm going to say the home side will prevail by 4-6pts.  If that's the case then it will probably have been a roller-coaster ride of a match to fit its champion v challenger billing.  Weekend mornings have been amazing over the past month or so since this tournament kicked off...this match could be even better still.  JLP

PS : Here are some "8-0-Reviews" of the Blues' three matches so far in the Super Rugby Aotearoa, and as they had a bye in Round 4 I also did one for the Crusaders' match that weekend...

A match that “had everything”.  Two quality lineups. Outstanding individual performances. Much risk taking at the breakdown despite the new rules, some paying off, some not, some lucky not to see yellow. But most of all some scintillating finishes from Frizzell, Punivai, Reece, and especially Will Jordan when single-handedly notching his BP-clinching second towards the end.  Scoreline doesn’t do the Highlanders justice, nor does the current table, but still next Saturday’s Saders v Blues clash couldn’t be set up better.

Early honours were even but eventually relentless grubbers to the corner paid off when Gibson’s attempted clearance was blocked and Papalii dotted down.  Strong running from Clarke then set up Reiko Ioane before the break.  The Highlanders came storming back with two quick tries to take the lead but Papalii’s second soon pinched it back.  A late decision not to force extra time was thwarted when Sotutu held up a maul close to his line preserving the Blues 100% record.

In horrible conditions the Chiefs had most of the first half possession and territory yet only 3 Mackenzie penalties to show for it.  Meanwhile one Blues trip into the 22 saw Sotutu dive under the posts giving them a 10-9 lead at the break.  Gatland’s men couldn’t even capitalise on a sinbin after HT and gradually the visitors pulled away thanks to a strong showing from their pack especially skipper Tuipulotu and ultimately a fine team score finished by Telea.

The Blues just edged a first half that swung back and forth in both tactical kicking and tries, with Caleb Clarke's strong finish the best, although Dane Coles' winger-esque score in the corner ran it close.  Tries were also even after the break but after Papalii stretched the Blues lead, 3 Otere Black penalties meant Booth's late score was mere consolation.  Home side was good for their victory with Black, Ioane and especially young No8 Hoskins Sotutu impressing the most.
at July 10, 2020