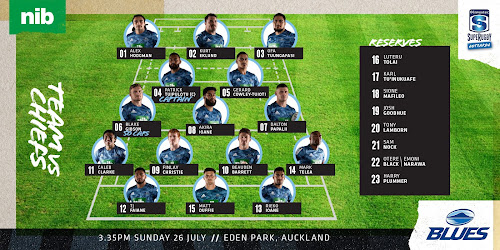 When I took the plunge and decided to follow the Blues for the remainder of the Super Rugby Aotearoa campaign (one which conveniently brings me right up to the resumption of the Pro14 as luck would have it) there was little doubt over which player would get the bulk of my attention.

And no, it wasn't Dan Carter.  I'm actually surprised he hasn't been involved in a matchday squad in the first seven weeks, but still it was clear that the focus was going to be on Beauden Barrett.  Then I watched back their first three matches and I saw a different story.

Three wins out of three, and while BB did show some quality, the perfect start would not have happened without the likes of Hoskins Sotutu, Caleb Clarke, Reiko and Akira Ioane, Dalton Papali'i and skipper Patrick Tuipulotu to name but a few.  Quality contributions all round helped them to victories over the Hurricanes, Chiefs and Highlanders to make them look like real contenders for the title.

But as we all know, to maintain that kind of record throughout a tournament, you have to be able to perform when at least some of your stars are not available, and over the past couple of weeks, BB has been required to produce man of the match performances in two big challenges away from home against the Crusaders and the Hurricanes, only to be found wanting both times.

Well now the pressure is arguably even greater.  With Otere Black having taking what looked like a nasty blow to the head in Wellington last weekend, he won't start in Round 7 although he does take a place on the bench.  The leaves the presumptive All Black 10 to revert to his test position for Sunday morning(Irish time)'s match, and with Warren Gatland's "0 wins from 5" Chiefs coming to town, surely nothing short of victory will satisfy his home crowd.

One thing I reckon can be said with certainty - Black isn't there just for back up and no doubt will come on for 20-30 minutes in the second half allowing BB to go back to 15, but still the expectation will be that there will be something a margin to defend at that stage.  And with Clarke back in action there's plenty of destructive pace available in the backline to provide the finish when needs be.

But of course despite all the form in the home side's favour we cannot rule out the Chiefs.  They have the Crusaders coming to town next weekend so they will be extra keen to avoid the losing streak stretching to 7 and the pain of the 24-point lead they coughed up on home soil last Sunday will be felt from Warren Gatland all the way through the squad.

And it's not like they haven't won in Auckland already this year - back in the simpler times when everything in the calendar was "normal", Gatland kicked off his reign at the Waikato outfit with a convincing 37-29 win at Eden Park.  The only problem is that the teams have gone in completely different directions since and this brings us back to the expectations surrounding BB as he was not yet wearing blue back then.

Looking at the Chiefs lineup I can't see names like McKenzie and Lienert-Brown and Cane (not mention Cruden on the bench?) without thinking they can make this into a contest, but still I have to figure the home crowd will be what proves the motivating factor for the Blues and I actually feel the bookies' prediciton of a 7 point win will be beaten and the margin will be more like 10-12 by full time.

As for the other SRA match this weekend, well, I can't really see anyone beating this Crusaders team so I reckon a home win in Christchurch is virtually a given - that said, I reckon the Hurricanes are on a roll now with three wins in a row after a shaky start and certainly have the talent around the park to make and impact so if they can play for 80 minutes you never know.

To show my dedication to my new temporary team I have every intention to get myself in front of a screen at 4:30am on Sunday to watch and tweet live.  That doesn't necessarily mean I'll be getting out of bed though!  Here's to another entertaining round of southern hemisphere rugby.  JLP