Twitter polls are all the rage these days as we try to pass the time waiting for rugby to return, so here at Harpin Manor we've decided to join in by launching our own to look at general opinion over Leinster jerseys from past and present.

We've added the name "McJerseyface" as a nod to online polls from the past which may not have gone quite as intended, and since this will be open to all on twitter, who knows which way it will turn out, but hopefully we can have a bit of craic along the way whatever happens.

All we needed was a format, and what better way to structure the competition than in a manner similar to the Heineken Champions Cup.  Eventually we will have 20 qualifiers which will be drawn into five pools of four, with the pool winners plus the three best runners up being seeded into quarterfinals.

Here's how we structured the draw - in "Pot 1" we had the jerseys from Leinster's European victories, including the 2013 Amlin.  "Pot 2" had mostly Celtic League winning jerseys (noting that our 2013 and 2014 wins were with the same jersey we wore at Twickers in 2012).  Then we went for 6 more blue jerseys for "Pot 3" (one was allocated to Pot 2 by draw, namely the home jersey from 2014/15) - this was done at our discretion, some have been missed, our apologies if your favourite one didn't make the cut.  Finally we put a selection of White, Alternate, European and Training jerseys into a series of qualifying polls so we could get used to the Twitter function and this produced the contestants in "Pot 4".

We have made one or two bonehead mistakes along the way, not least of which was my leaving out a jersey that I actually own in the first collection!  But with the help of eagle eyed readers we were able to make a few corrections, and in the end a line had to be drawn, so we now have the 20 jerseys you see below.  Remember - this isn't called "The Greatest Leinster Jersey Competition".  It's "The Leinster Jersey McJerseyface Cup".  In other words, it's all for the craic.

Keep an eye on our Twitter feed between now and the final on May 28.  Polls will generally start around 5pm and run until 9pm.  Be sure and vote if you can!!! JLP

NOTE : In the event of a tie for a qualifying place in any poll, there will be sudden-death 1-hour polls until a winner is found. 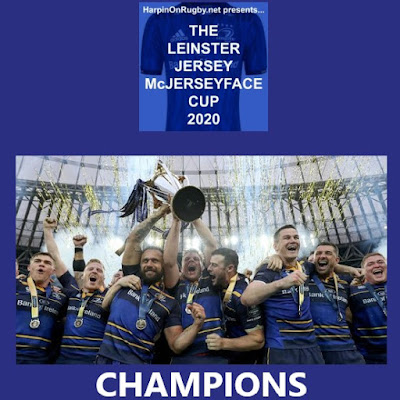 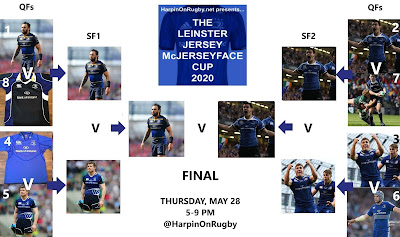 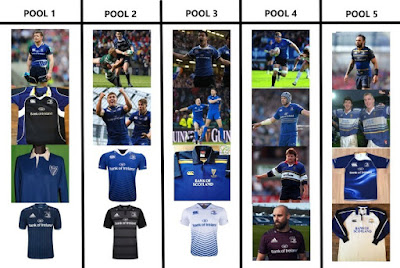