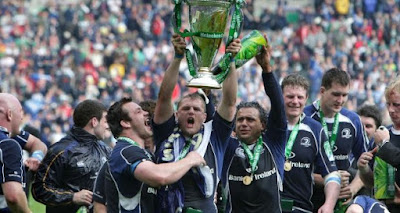 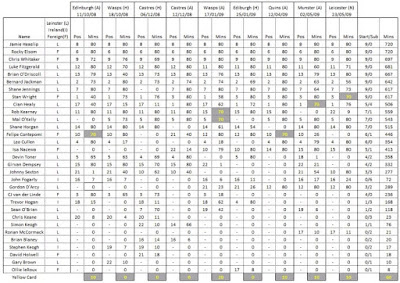 Which two Leinster players were on the pitch for all 720 minutes of the 2008/09 Heineken Cup winning campaign?
Which was the only Leinster player to receive two yellow cards over the nine matches?
Against which team did all 8 in Leinster's pack play the full 80 minutes?
True or false - the only match from the 9 in which Johnny Sexton played a full 80 minutes was the final?

We've very grateful here at Harpin Manor to Leinster super fan Miriam Collins for sharing this amazing compliation of time stats from the nine matches that led to our first triumph, and they can be turned into some interesting quiz questions.
She was apparently inspired to do the research by someone claiming that a larger than usual proportion of the players in the squad didn't hail from Leinster.  As it turned out, players from the province accounted for 68% of the total minutes, which does seem lower than you'd think, although I wonder how that would compare to local players in the squads of other trophy winners like Saracens and Toulouse?
As a side note, this reminds me of something I have wondered for a long time - should rugby union have a standardized "box score" format for every match, similar to sports like baseball and cricket?  Coaches require all kinds of deep dive information themselves I know, but I'm talking about a chart for all 46 players named on the day of a match with an agreed amount of columns providing information such as tackles made, penalties conceded, etc.  I know sites like ESPN do that already, but the format varies from site to site and I'm talking about a minimum amount of data that fans would require for each match?  A debate for another day, perhaps.
Many thanks again to Miriam for passing on her excellent work.  JLP
at May 26, 2020