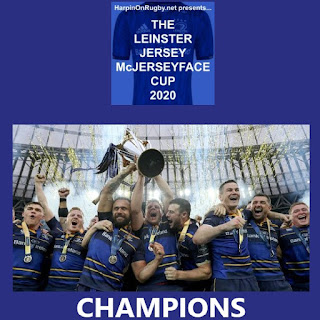 "If you can't play the game as we have seen it ... if you have to go with stark modifications, there is no point in resuming."

The 'Tullow Tank' has a book coming out

The42.ie
When not in her PPE and scrubs, she reverts to an alter ego: Louise Galvin, Ireland Rugby Sevens international

John O'Sullivan - Irish Times
(possibly behind paywall)
All the trials, which are optional, are designed to reduce the risk of transmission among players by bringing down contact in rucks, scrums and mauls by 25-50%.

Gerard Meagher - The Guardain
...the Giltinis name is certain to be polarizing

Note - views expressed in "Front Five" links do not necessarily reflect those of HarpinOnRugby
at May 29, 2020