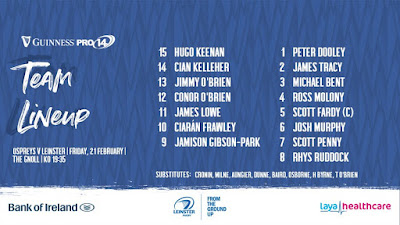 Is it possible for there to be TOO MUCH rugby for us to watch?

On paper a full programme of Six Nations Men, Women and Under 20 plus Pro 14, Premiership AND Super Rugby looks like a banquet, yet with us, like, you know, having lives n stuff, it makes for a lot of tough decisions.

And those decisions get even harder when two matches I really want to follow are on at the same time!!!  The Irish Under 20s have a massive triple crown decider tonight against their English counterparts, yet it is on at the same time as Leinster play the Ospreys!!!

By the way - yes, I'm totally aware my gripes above are a classic example of a "first world problem" for me, but I bring it up because I also wonder is it a problem for the game's organisers because I doubt I'm the only one who can't get train my eyes on every match when they are scheduled so close together, which may be a concern to sponsors.  Mini-rant over.

On the actual match in question...from the standpoint of the league in general, this should be a massive contest, given how the teams have 10 titles between them.  I always say this is the Celtic League's premier "organic rivalry".  However from the standpoint of this season's Conference A standings, this should be as close to a guaranteed away win as you can get in rugby union, with the Welsh in last place with just 2 wins while Leinster sit 15pts clear at the top with a 100% record.

As with most things, the reality lies between those two extremes.  During the week in the latest Harpin podcast, Conor Cronin & I discussed the fortune of each Pro14 club and when it came to the Ospreys, we agreed that while things haven't been going great for them in recent seasons, their win over Ulster last Saturday was a massive boost, plus they definitely have the ability to at least overtake both Dragons and Zebre above them.

When you factor in the change in venue from Liberty Stadium to Neath RFC plus a much-changed Leinster lineup, there are just about enough variables there to suggest this match may not be as straightforward as many think.

I also see some challenges for us in the back row battle, something I don't often say given the wealth of talent at Leo Cullen's disposal.  It's just that with Murphy, Penny and (the always excellent just better at 6) Ruddock not having that much time together and Ryan Baird, who in his few appearances has mostly played at lock, on the bench wearing 20, this could arguably be the "weakest" back row we've fielded all season.  Meanwhile the home side's 678 combo of Lydiate, Cracknell and Baker seems to be their strongest area.

OK maybe I am stretching things a tad looking for weaknesses on our part but still believe there's a valid case there that nothing will be straightforward tonight.  There are of course plenty of positives in the Leinster lineup so what say I harp on some of them...

The weather forecast for Neath this evening shows a bit of wind and rain though nowhere near Storm Dennis proportions, which is bad news for last weekend's Leinster back three of Ferg & The Kearneys, and good news for Hugo Keenan, Cian Kelleher & of course James Lowe who line out this time.  Tries in the Cheetahs mudbath were only ever going to come from forwards, so if Ciaran Frawley has a similar outing that shows good decision making and technique, there could be  a lot more chances for his back line.

In midfield, the "COB-JOB" pairing is reunited (with TOB waiting in the wings for good measure) and all have done well this season, albeit under the radar in a squad doing extremely well all round.  Much like our back row, they have a great opportunity to stand out in this match and I'll be looking at Conor in particular to bring the strong running and carrying I know he can.

Despite the slagging I gave to Sean Cronin for his late mishap at the weekend in my writeup, I'm surprised to see him on the bench yet again.  With Bristol Bears borrowing Bryan Byrne, this selection means that Nugget is now officially our third choice hooker.  Of course I mean no disrepect to James Tracy in this - he has played really well and is just as deserving of a start, it's just that having been Ireland's primary Best backup for so long this seems a long way for Seanie to fall.  Hopefully he'll have enough opportunities over the rest of the season to play his way back and we'll definitely be all the better for it.

So when it comes to a prediction, while I believe we can do enough to get win number 18 tonight, I'm not sure if I agree with the bookies that it can be by as much as 10 points.  With all the caveats I list above, I think we need to get points on the board early to stay ahead by more than 7 by the end - if we take too much time to settle it could be a whole lot closer.  So I'll back the lads to come out on top by 4-6.  JLP