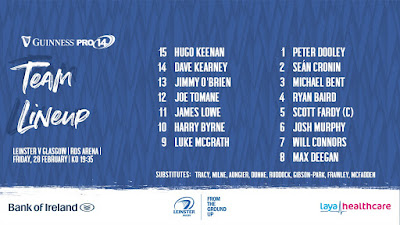 On Friday morning I went to Energia Park in Donnybrook to watch the Irish Men’s and Under 20s teams being put through their paces in an Open Training session.  I met up with long time Harpin contributor Joe Sheppard, now of Three Blokes A Ball & BOD fame, as well as Conor Cronin.  Afterwards I took the opportunity to head for a coffee at Insomnia Donnybrook where we had a quick chat about the effect of the Italy postponement on Ireland’s Six Nations campaign, as well as looking ahead to Glasgow’s visit to the RDS.

For the record, my prediction is closer to Joe's I reckon Leinster can run out 8-10 point winners; looking for the Warriors to bring it but for the likes of Harry Byrne, Will Connors & James Lowe to respond and then some.  Hope to see you there!  JLP

PS : Full disclosure...for some reason I kept saying "Three Balls..."  instead of "Three Blokes...", thus literally making a balls of it, so I "fixed" it in the editing process; the transitions aren't exactly subtle but it sounds much better than with the gaffes!!! 😜

Also, please forgive the hustle and bustle in the background at the coffee shop!!!