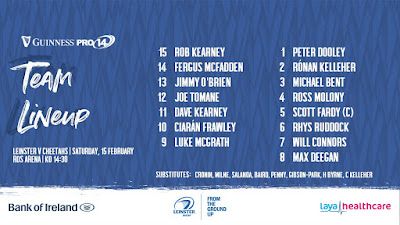 It might seem a bit much to say "ONLY eleven points" when referring to Leinster's lead atop Conference A but hear me out.

We play Ulster in Ravenhill in the final round, and as of now we have ten matches each before that.  So theoretically "all" they have to do is to reduce that margin to five and that interpro becomes a home semifinal decider, and seeing how they are scoring tries for fun this season (even in defeat to us) they could easily capitalise on any kind of slip up on our part.

It's pretty much all I can think about when assessing our chances because if we dwell too much on our sweet sixteen wins on the bounce to start the 2019/20 campaign, it could prove a distraction.  The only way to approach each match is by looking ahead and this matchday squad for Leinster definitely looks like one which can do that.

What a backline for starters!  Perhaps the rest of the league know too much about Ciarán Frawley or Jimmy O'Brien but both have shown good form this season and when you add that to the insane amount of experience around them, I can't help but wonder if the Cheetahs are asking themselves : "Eh, I thought this was meant to be a team WITHOUT test experience???"  Plus James Lowe isn't even there!!!

And it's not like our pack is too shabby either.  The Almighty Leinster Backrow One Arm Bandit has thrown up a magnificent trio involving two dropping down from the Irish camp, Will Connors and Max Deegan, plus one who would be quite keen to return with them, namely Rhys Ruddock.  That's a whole lotta talent to go with a whole lotta motivation, and if that's not enough, there's yet another heir apparant Scott Penny waiting on the bench to show what he can do.

When it comes to the Toyota Cheetahs, I guess it's kind of like the French rugby team in that we can't be sure what team is going to show up.  In their last three matches they got hammered by Zebre before doing the double over the Southern Kings, and while the latter feat sounds like it was easy, the second win was by just the one point.

But although they now lie in the playoff positions, my suspicions that the appetite in SA for success in this league might not be what it should were confirmed on my podcast during the week by Brendon Shields of Rugbycology.com, who is a Cheetahs fan but also has some love for Leinster having lived here for a spell.

You can be pretty sure that any success they get at the RDS will start with their halfback pairing of Ruan Pienaar and Tian Schoeman.  We all know what RP can do but the outhalf has put in some good outings in this league since they joined so we can't really afford to give them an inch.

I really do believe that Leo, Stuart and co have instilled enough confidence and preparation into this squad to stay focused and get the job done.  The bookies have us winning by 17 points but while I'll take five match points regardless of the winning margin, I can't help feeling I'd be disappointed if we don't beat that so I'm predicting something in the low twenties.

Here's to Storm Denis not being a menace and letting us have another great day's Leinstertainment at the RDS (maybe, just maybe, we'll have more to talk about than Ben Whitehouse come full time!!!) - hope to see you there!  JLP