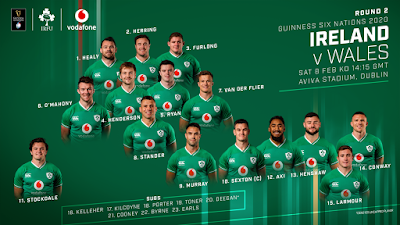 For the Six Nations, there are no warmups, just a two-week period from the end of the pool stages for the coaches to gather their troops and prepare for battle.

So I suppose it's fair to say that particularly when you have a drastically adjusted leadership set up, having everything clicking into place from the off would be a lot to expect.  And I really was aware of all those caveats last weekend when we were perhaps a bit fortunate to come out with the win over Scotland; I believe it's possible to be unhappy with a particular 80 minutes without losing all hope that things can improve.  But as far as our hopes in this season's Championship go, those honeymoon caveats need to disappear quick smart.

The changes to our lineup suggest we would have gone with the same 23 had there not been injuries, and despite being on "Team Cooney" in the great selection debate of the day on these shores, I can fully understand why Farrell would want to keep faith with those who got his first nod.

I could hardly have a problem with the replacements, could I, especially as both Peter O'Mahony, Robbie Henshaw were in my personal starting lineup and I also had Max Deegan on my bench.  Tack on Keith Earls and you have a group of quality players who add their own brand of quality without taking anything from the team.  So it's all about how that team plays together on Saturday.

This is a very different Welsh bunch to that which slammed us last March, though despite the change in coach it's not all that different to the one that played in a RWC semifinal.  And their changes from that game take nothing from their quality either.  I noticed a lot of chatter among Welsh twitterati that having Faletau back was like having a new cap - if so, that's not a bad one to have!  And for their sakes I reckon it's better not to have George North at 13; perhaps if he had more time to prepare for the role but now I reckon he's much more dangerous on the wing.

One thing's pretty certain, though - no matter how distinctively "meh" their regions may be form-wise, they will come together and play for that red jersey so if we don't do likewise for our green ones from the kickoff, we could find ourselves on the back foot quickly.

I still want to see a different style of play.  The move that led to our first try was cleverly conceived, and throughout the match there were some fine attack patterns that found space for our centres, but I just think we could be much more direct.  The reason I plump for Cooney is because he keeps defences honest around the fringes but that said, I've seen Conor Murray play that way too, in fact he's scored many tries for Ireland taking it himself from the base.

But it doesn't even have to be that way, just something different.  England, New Zealand and Wales all beat us well last season because they seemed to know how we were going to set ourselves up.  I can think of nowhere else to go from that but thinking outside the box kicking.  Sure, it's fine once and a while and we're better than most at getting positive outcomes from them, but doing it every time means they're going to leave more men in the backfield so there must be some advantage to be gained by mixing it up.

The scrum could also be a worry.  You don't want to get to get on the wrong side of a ref like Poite, though it doesn't hurt that the Welsh had a few issues themselves last weekend, when I felt the 42-0 scoreline didn't really tell the story of the 80 minutes for them.  Discipline in general could be the fine margin that tilts this match either way, but to fall behind at set pieces in particular would be a disaster.

There's really not that much more to add - overall, I'm more than happy to give Andy, Johnny & co plenty of time to settle in to the role.  It's just if we're to achieve anything in this tournament, both a win and a good team performance are a must.  The bookies give it us by 4 - I tend to agree we'll get the most out of our home advantage, and I'll even lean in a more confident direction by saying we can do it by 5-7 points.

Here's hoping the weather doesn't play too much of a factor for everyone involved - hope to see you at the Aviva!!! JLP

PS - As always, best of luck to Irish Women's and Under 20's squads this weekend! 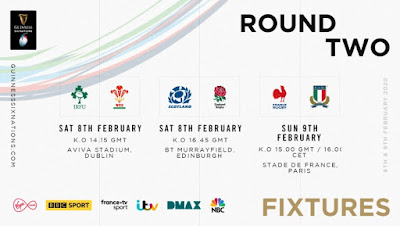