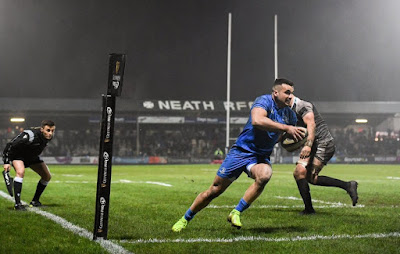 FROM THE WINDY GNOLL

[Note - with the Six Nations also on this weekend, our latest Leinster writeup follows our "try-mline" format where instead of turning notes from 2nd watch into an article, I just publish the notes]

Ospreys kickoff, clean exit from Leinster as Frawley finds touch
Midfield Osprey phases go nowhere, lineout to Leinster outside 22
Clearance from Conor O'Brien ends up with Cai Evans who sends territory kick into Leinster 22 - JGP lets it bounce producing a 5m lineout
Exit kick from Frawley falls to winger Luke Morgan in play outside 22
After phases back and forth along 22, Adam Beard knocks on
Penalty to Leinster for collapsing the scrum v loosehead Nicky Smith
Leinster lineout at halfway stolen by Cracknell, pen to Ospreys for offside
Luke Price placekick from halfway line hits upright, Conor O'Brien recovers
Frawley clears to touch at 22
Nice line by Dirksen breaks Leinster line gets deep into 22
James Tracy rips away a turnover at next phase, JGP clears to touch

Conor O'Brien replaced by Tommy O'Brien
Shortly after Ospreys lineout, James Lowe rips away a turnover at breakdown
Leinster get it to halfway but Frawley pass goes behind Lowe back towards 22
Another Frawley pass goes to ground but Jimmy O'Brien still gets it
JGP straightens run and gets Leinster into Ospreys half for first time
On 13th phase, Frawley sends crossfield kick to Lowe who takes it standing
Lowe under pressure at breakdown lets it go and Ospreys recover
High ball caught at halfway by JGP, scrum called to Leinster at breakdown
Another scrum penalty to Leinster, again by Smith
Lineout, phases, Fardy quick pass to T O'Brien, TRY LEINSTER, 0-5
[Leinster's first real attacking position, TOB had two good carries in the build up]
Well struck conversion by Frawley goes over, 0-7

Nice grab by Molony from the restart
Box kick clearance from JGP caught by Otten, offloaded to Kieran Williams
Williams slips thru JGP tackle, has line at his mercy but steps inside
Tackled by Kelleher, knocks on (protests foul play in vain)
Frawley clears to touch out of 22
Ref speaks to Ospreys forwards about delaying lineout throws
Molony penalised offside, Price pushes penalty kick wide of post
Leinster run it out from 22 to halfway but another pass goes to ground, knockon
Ref talks to both hookers about scrummaging
Ospreys try to work it wide but pass goes forward into touch
Another scrum penalty to Leinster, this time v tighthead Gardiner
Leinster advance into Ospreys half, pen advantage not needed as we get into 22
Eventually Lowe bundled into touch, back for knock on advantage

On crash ball from scrum, Lowe has it stripped by K Williams, Ospreys clear
Leinster work it back to the Ospreys 22 before T O'Brien knocks on
Ospreys clear from scrum to touch back at halfway
Scrappy Leinster scrum recovered by Cracknell - big tackle by TOB on Price
Penalty to Ospreys for going off feet but Evans kicks ball dead, back for scrum
After scrum Frawley chips ahead, taken by Lowe at 22 but stripped by Price
Price finds Keenan not touch with clearance
Frawley fails to handle pass from JGP and it goes to touch
After lineout Aled Davies snipes and gets close to Leinster 22
TOB told to release ball in tackle, he doesn't, penalty called (harsh?)
Luke Price kicks penalty, 3-7
Ospreys exit from restart by kicking to halfway, taken by Keenan
Pass by Frawley>JOB goes to ground, taken by Morgan, TRY OSPREYS 8-7
[too many passes going to ground, possibly timing issue after early change in Leinster centres, still not good enough]
Price kicks conversion, 10-7

Thats about the right HT score given all the chances Ospreys had though it shouldn't have taken an error and lead may not be enough with wind. Leinster gaining much more from running straight than passing, need to sort that asap. All to play for, both Ds seem strong. #OSPvLEI
— Harpin' On Rugby 🏉 (@HarpinOnRugby) February 21, 2020

Good Leinster pressure from kickoff forces exit clearance to 22
Lineout batted back by Beard, Ospreys clear but out on full, back for 5m lineout
Lineout taken by Fardy, maul, phases at line, pen adv, knockon, back for pen
Scrum option chosen by Leinster
Good shove by Leinster, scrum wheels, another pen awarded
Scrum wheels again, another pen, this time for collapsing, warning given
Ospreys replace tighthead
Ruddock brings to just short of the line, phases...
Josh Murphy gets it over beside the base of the post TRY LEINSTER 10-12
Frawley kicks conversion in front 10-14

Price kicks the penalty in front, 13-14
Price exit kick off restart let bounce by Keenan who recovers
Lydiate jackles a penalty, ball put to touch in Leinster half
Fardy gets a hand to lineout but Ospreys still recover it
6 phases gets to 22 when Dooley rips it clear, wins penalty for not rolling away
Touch found in Ospreys half but Beard steals another lineout
High Osp kick doesn't have much distance, Leinster recover, Dooley takes it on
Penalty v Osp offside at the kick, Frawley finds touch in 22
Lineout, maul, TOB knocks on, Osp play on in own 22
Price clears but JGP pinged offside, clear further to touch in Leinster half
Baird steals lineout, quick pass from Lowe then puts Baird through, gets to 5m
Long flat pass from JGP finds Fardy out wide
12 phases at the line, Leinster knock on


K Williams returns from HIA
Harry Byrne on, Frawley at 12
After scrum under posts, Price clearance doesn't find touch, taken by Keenan
Pop pass by Harry to Lowe gets him into 22, further good offload to Cronin
More quick hands from Lowe & JOB get it to Kelleher in space, gets to line
Ball held up, 5m scrum
Phases after scrum, penalty v Sam Parry
Good shove by scrum, Osborne takes it, pass to Kelleher, try, 13-19
Harry Byrne kicks a good conversion 13-21
Osborne box kick clearance off restart doesnt go very far, Ospreys on attack
11 phases get nowhere until they spill it in the tackle by James Lowe
Penalty to Leinster at scrum, not driving straight
Harry finds a great touch in Ospreys 22 as Dooley named MotM
Baird doesnt take dart, Ospreys recover
Ospreys try to play on but Leinster tackling as though 22 was try line
Price kicks dead to end the match


Far from perfect, too many passes going to ground and we needed help from Ospreys being wasteful but that said, the home side were much better than table suggests and I'll take the four points. Scrum dominant, good shifts off the bench from Baird and Harry B. #OSPvLEI
— Harpin' On Rugby 🏉 (@HarpinOnRugby) February 21, 2020

OTHER COMMENTS AT FULLTIME FROM THE RUGGERSPHERE....

Richard Mifsud It says an awful lot for our boys that despite playing quite poorly with a very inexperienced side at a resurgent Ospreys they won. They managed the contrary wind again very well until a couple of brain farts from the 38th to the 40th minute. A wee bit better in the second 40 but too many unforced errors for my liking. Still, they found a way and that’s all we can ask for TBH. Standouts for me, the front row and JGP. 18 and 0 and counting #COYBIB


Harry B just gets better and better every time he puts on the shirt. Baird a serious prospect. Exciting times ahead.
— Aisling O'Connor (@aisling7) February 21, 2020

Conor Cronin I'm very impressed by the work rate of the whole team. No one wants to shirk responsibility. Everyone puts their all into grinding out the win. I think with a couple less mistakes, a bit more awareness of each other and a BP could have been had too. But I'm very happy to take that 4 points and look forward to Glasgow next week

Sean Michaels Whilst the whole team put in a decent shift there are a few who will not be looking forward to the customary Monday review. Thought the front row, special mention to Michael Bent had good games. Overall they did what they had to and ground out the win

Joe Sheppard Good solid workmanlike performance tonight. Fair play to Ospreys who were good in D overall and made life at times difficult for us. Unlucky on occasions not to exploit more. That's a GOOD win by Leinster.


Friday night, @Rugbai_BEO, The Gnoll - all I need now is a feed of pints in Scruffy Murphys before heading off to Howl At The Moon in search of the shift and its the early noughties all over again! #OSPvLEI
— David Cahill (@docathail) February 21, 2020

Dónal Foley Scrum looked very good, we were very sloppy in patches some but not all of which were forced by a much improved Ospreys.

I was remiss in my tweet at full time when praising those who came off the bench - I should have also included Tommy O'Brien, who was introduced early yet save for a knock on or two (that were part of the whole timing thing that saw so many passes go to ground), he had an excellent game, providing great front foot ball on several occasions and I'd definitely like to see him get more game time before the season is out.

The Ospreys played really well especially on defence, but considering all the changes we made to our lineup from the previous week, they should be disappointed as the result would have been very different had they taken their chances, especially when they had the 16th man Storm Dennis on their side in the first half.  That said, we were very good at taking our own chances and I was happy with the win.

In baseball, they have a thing called a "magic number" when a team is within touching distance of finishing in first place.  Leinster's magic number for a home Pro14 semifinal is now 31; every point we gain in our last 9 matches, as well as every point Ulster drop, brings it down by 1, and when it reaches zero, it's in the bag.  We'll be keeping an eye on this over the coming weeks...why?  Because we can.

Next up for us is Glasgow at the RDS...as I'm writing this on Sunday evening, you'll appreciate it can't come soon enough!  JLP