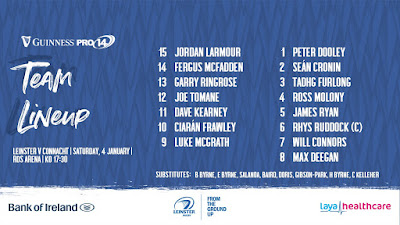 "I can see us winning by double digits, but if the visitors keep their discipline on the defensive side of things we might have to knuckle down to clinch another bonus point."

This is what I was saying in my preview ahead of the corresponding fixture last season.  I was confident because Leinster had gotten off to a flyer in the 2018/19 season, leading Conference A by all of 10 points after just 9 matches, averaging 34 points per game with a ridiculous +170 in the points difference column.

In the end, although we did win over the Westerners, it took a try about a thousand minutes after the clock went red to get it done.

So even though we find ourselves in a similar position league-wise  this time around (lead of 11pts after 9 rounds, avg 34 PPG and a slightly more ridiculous PD of +180), can I afford a similar amount of hubris, even if the bookies are offering exactly double the spread (28pts) of last year?

Well, although Connacht got off to a decent start to the season themselves, after poor showings against both Munster and Ulster in recent weeks, the RDS will be the last venue they'd want to visit next, especially with crucial Champions Cup matches on the horizon (although they have won 2 pool matches to Gloucester's 1, the Premiership outfit are ahead of them in 2nd place thanks to a slew of BPs).

But their Pro 14 situation is even more precarious.  Six of the seven teams in Conference B are still well in contention for playoff spots so every point will be crucial, so they'd be mad not to at least make an effort on Saturday evening.

All of that said, if Leinster continue the kind of form they have shown this season, all the motivation in the world won't be enough.  We've had matches where we probably should have scored more points, yet our defence has seen us through.  We've had other matches where we probably should have conceded less points, yet our try-scoring saw us through.  All with the usual amount of chopping and changing which has our "players used" total heading towards the 50 mark once again.

The name in this lineup that jumps out at me is that of Ciarán Frawley, who will no doubt be keen to take up the gauntlet thrown down by Harry Byrne in the battle for our playmaking pecking order.  After some injury issues this is a perfect platform for him to show the RDS crowd the full range of his talents, and he has a great back line with which to work.

With him at halfback is Luke McGrath, who by no means can call himself our presumptive starter with JGP breathing down his neck, not to mention much promise in the wings with Messrs Patterson, O'Sullivan & Osbourne.  I reckon the bulk of the spotlight should be on our halfbacks to perform on Saturday and should they rise to the occasion then the bookies should be proven right.

Elsewhere in the backs it's great to see Joe Tomane back in action; after a shaky start at Leinster he has really grown into an asset and should link up well with Ringrose in the centre.  Overall it's more of a "bring it into contact" selection we have behind the scrum this time around, with of course the notable exception of Jordan Larmour.

In the pack, well, there's no shortage of ball carries either, that's for sure.  Furlong, Cronin, Ryan, Ruddock, Deegan - all well capable of busting gainlines galore.  And when it comes to defending, we have another chance for Will Connors to do his thing (he posted 23 tackles and none missed both last week AND in our trip to Galway earlier in the season).

There are certainly no shortage of threats on the Connacht side, led by the nippy Caolin Blade who should fancy outshining Luke McGrath, but I can't help feeling that if they are to take anything from this fixture, Leinster will have to hand it to them by way of a serious drop in form.  All of which leads me to predict a win for the boys in blue (with all the usual caveats of course) by about 18-20 points.