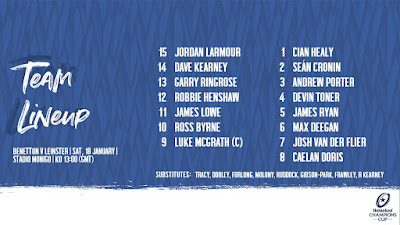 Having not watched Benetton's match at Northampton last week, I was surprised to hear Saints coach Chris Boyd express disappointment in his team's performance after a bonus point 33-20 victory.

Then I watched it back and knew exactly what he meant.  The Italians actually led with less than ten minutes left despite ridiculous possession and territory advantages for the Premiership outfit.  Maybe you can credit some of the seemingly infinite knockons to defence, but I reckon Boyd had it right in that the home side were just unable to turn chances into points until the very end.

So now Benetton are back at home this weekend, does this mean their chances of success go up?  I mean, I know it's against Leinster, but take your pick of reasons why they should have optimism - they've proven in recent years they can beat us, it's their third crack at us this season and although they lost the previous two they showed they can put points on us, and what's more, since the four-time champs are already in the last eight surely they'll take their foot off the pedal just a little?

You might think all of that, but when it comes to the last point, Leo Cullen's lineup for Saturday's final pool match suggests something completely different.  Bar a few tweaks hear and there which make precious little difference in terms of quality, it's essentially the same matchday squad.  Mathematically we "only" need a win without a bonus point to guarantee a home semifinal should we qualify, but it seems "only" doesn't exist in our vocabulary this year.

It's hard to think of another team in Europe who could afford to leave the likes of Scott Fardy, Rhys Ruddock and Tadhg Furlong out of their starting lineup without making it look like they're somehow holding back, yet replacing them with James Ryan, Andrew Porter and Caelan Doris shows little or no change when all is said and done.

You can be pretty sure Benetton will be motivated to beat us, regardless of the fact they have no further interest in the Champions Cup.  But it's pretty say that if Leinster show up in the same mood they have been in pretty much all season, it will take one hell of a display by Kieran Crowley's men to get the better of us.

Luke McGrath has the captain's armband and that's not a bad reward for recent displays where he has certainly answered the challenges set by his rivals 9s at the province.  And alongside him in the halfbacks, Ross Byrne has challenges of his own after what seemed to be a dip in confidence against Lyon following an interception try.

If those two can gel quickly at the Stadio di Monigo, there is more than enough finishing power all around them to put this game to bed very early on.  You can take your pick of boys in blue when it comes to finding the tryline on multiple occasions this season so far - Dave Kearney, Garry Ringrose, "Man of the Match Max" Deegan, Josh van der Flier...but I'm getting a feeling that after a couple of fine assists last week, perhaps James Lowe might be extra determined to get on the score sheet.

When it comes to making predictions, the bookies have toned things down a bit this week after we fell short of the 40 spread they were putting forward last Sunday.  Still, they are more than confident that Leinster will do enough, putting our margin at a healthy 17 points.  I agree we should get something around that mark, although if we get a few early scores there's a lot of late ones in our bench so it could be more.  I'm going to settle on a 12-14pt win based on Treviso's determination to impress their home crowd.

Bon voyage to all travelling and here's to Leinster nailing down win number 16 and quarterfinal seed number 1!!! JLP

PS - ICYMI on this week's podcast myself and Cian "@RugbyKino" O'Muilleoir discussed all the possible Champions Cup Round 6 permutations, click here to have a listen...