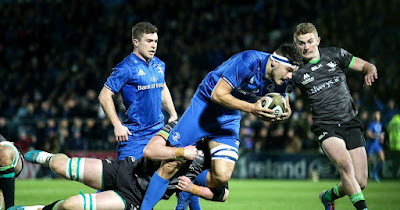 LESS THAN HALF WAY THERE

To win the Guinness Pro 14 you must first navigate 23 matches (24 if you finish 2nd or 3rd in your conference) and you must at least win the last 2.  Leinster have played just 10 so far.

To win the Heineken Champions Cup you must first navigate 9 matches, and you must win the last 3.  Leinster have played just 4 so far.

I can think of no other way to set up this post without looking like I'm assuming the boys in blue are on course to win all before them.  The rugby they are playing right now is so good that it seems to be hubris rather than any opposition which can possibly take them down.  We're not even at the halfway stage yet so the best thing we can do is forget about what has gone so far and look ahead to what comes next.

There is no doubt that the Christmas interprovincials did not go too well for Connacht, but whatever about their current form, I doubt there are many teams on the continent that would have been able for Leinster in this kind of mood.

We clicked into gear right from the kick off, had the bonus point sewn up by the end of the first quarter, and although the point-a-minute scoring rate eased off after the break, we still appeared determined to keep the 'duck-egg' on their side of the scoreboard for as long as possible, eventually letting it go on the 70th minute.

So far this season I have resorted to a format for these writeups which I call a "trym-line" because there has been so much try-scoring that it seems easier to just describe each one in order than go for an overview.  This time I'm going for something different again as I'd like to highlight individual players, because for me the biggest topic of discussion raised was the decision for man of the match.

In the end the gong went to skipper Rhys Ruddock, and while I have nothing against him as a player and there is no doubt he made big contributions to this win (like a key steal early in the second half after the Westies were camped on our try line), I personally felt there were at least half a dozen other Leinster players on which I'd rather harp even after having watched it a second time.

And the ironic thing about this particular sextet is that although they were all try scorers, in each case there was a lot more about their displays that caught my eye.  So let's crack on shall we.

It seems logical to start with Max since he got our first try, but the real reason is that I felt he was true man of the match.  2 tries scored, 2 final passes for other tries, 4 clean breaks, 4 defenders beaten, 26 tackles with 0 missed...his display was a microcosm of Leinster's overall.

And with so much attention these days on rookies Will Connors and Caelan Doris (both of whom could well have posted similar numbers on Saturday had they played 80 minutes) I firmly believe Leinster's biggest takeaway from this match has to be an appreciation for Deegan's contribution to the cause since he himself made his debut in December 2016.

For me it's all about his confidence.  No occasion nor quality of players on the pitch (on either side) seems to faze him; he just knuckles down and gets on with the task in hand, bringing that little bit extra to every tackle, every carry, every clearout, every set piece.  Many back rowers are praised for "unseen work" but more often than not it's impossible to ignore the things this guy does.

Even at a club with an embarrassment of 6/7/8 riches such as Leinster, it is very difficult to leave him out of the top three or four in my book.

This guy is playing the rugby of his life and has done so for over a year now.  Just looking at his try on Saturday (our second) shows how determined he is to impress these days - he had a lot to do to apply the finish yet he made it look incredibly easy.

In my preview I described our backline as one more likely to bring the ball into contact (with the exception of Jordan Larmour) yet Dave in particular wasn't doing it because he was looking to recycle; he fully believed he could break each tackle and was able to back up this belief time and time again.

Much like Deegan, Dave has played his way to a position at Leinster where despite the talent around him it is very difficult to leave him out on the big occasions.

Going into this match I thought the biggest spotlight was on our halfbacks for different reasons, and you certainly can't score eight tries without your 9 and 10 combining well.

Frawley has been dogged by injury since he came into the senior Leinster picture, and his luck on Saturday didn't get much better as a knock forced him from the field at a time he was probably scheduled to be replaced anyway.  Up to that point he had our backline ticking like clockwork, making good decisions and finding the right levels of accuracy pretty much every time.

Even his own try came from him not only putting Max Deegan clean through but also providing perfect support to receive the return pass.  Hopefully he will be back to action soon.

Much maligned by fans after his early appearances for the province as well as being prone to injury, Joe now looks like he's totally clued in to our way of doing things and we are certainly reaping the benefit.

Some of the lines he runs on crash ball plays are so good the would-be tacklers are beaten before he even gets the ball.  Having him, Henshaw and Conor O'Brien as 12 options provides us with almost unlimited power off of set pieces.  There was simply no stopping Joe on Saturday when he finally had the try line in his sights and you could tell how much the bonus-point-clinching score meant to him.

You have to look at the Leinster set up for a long, long time to find anything remotely resembling a "weak point", and you couldn't even really use that term when it comes to Luke, but it has looked as though those behind him on the pecking order were closing the cap considerably since he returned from Japan.

With the Andy Farrell era imminent and the general Irish 9 talent pool ever expanding from John Cooney's superhuman efforts at Ulster all the way down to young Rowan Osborne impressing at Thomond Park last week, there was always going to be pressure on Luke to perform on this stage and as I said earlier, he definitely combined well with Frawley to make every bout of possession count.  He took his own try well, spotting a gap at the line and taking it himself from the breakdown.

Deegan did much of the heavy lifting for Garry's first try yet he still had a couple of covering defenders to beat before reaching the line.  His second was more out of Connacht's end-of-match dejection than anything else; despite Gibson-Park's kick pass going a bit askew, Ringrose still had a ridiculous amount of time to both catch and finish.

But he provided more than just try-scoring - it was his long miss pass that set up Dave Kearney's try and along with Tomane they were able to snuff out Connacht's first point of attack more often than not.

I see our 'blue wall' as akin to a 16th player these days and we were treated to another masterclass on Saturday.  It has been so good of late (have to assume the late Ulster try-fest was either an aberration or as is more likely, given what happened at the Kingspan Friday, was simply because they are that good) that I wonder we will force the game's boffins to consider re-thinking the offside laws.

Putting a maximum of two players into each breakdown allows the cordon of defenders to not only have strong numbers, but it also means they can stand very close to the breakdown allowing tacklers to make the most of their line speed.

Connacht clearly came to the RDS with a view to kicking themselves into better territory positions, but even then we snuffed them out so much in the first half that they all but abandoned the boot after the break, opting instead for quick offloading and sniping runs from Blade to find ways through.  Sadly for them, that generally didn't work either.

It was a busy day for both defences as the tackling numbers show - 11 players broke the 20 mark.  And there were some injury concerns other than young Frawley - both James Ryan and Will Connors were withdrawn earlier and as if things weren't bad enough for the visitors, both of their Fitzgerald brothers had injuries, with Conor's late in the game looking more serious.  Hopefully all will recover as soon as possible.

And so we come to the end of another festive interprovincial series and it has to be said things have never looked so good for Leinster, which is odd because we were saying that at this stage last year yet somehow we have managed to do even better.  Still though, we can't lay claim to being "out of sight" in our conference just yet.

Ulster are "just" 11 points behind us and are also scoring tries for fun so it would only take a slip up or two from us to get them back within striking range; the last thing we'll want is for them to have any sort of chance to pinch top spot from us when we travel to Belfast for the final round of matches at the end of May.

But for now the attention returns to Europe and while our quarterfinal spot is already guaranteed, thankfully we have the seeding system to keep us focused for the remaining matches against Lyon and Benetton respectively.  I just don't envy Leo, Stu, Dr Phil & co their task of finding the best starting XV from this particular squad.  JLP