Guinness Six Nations returns for 2020 with a call to “Come as Rivals, Leave as Friends” 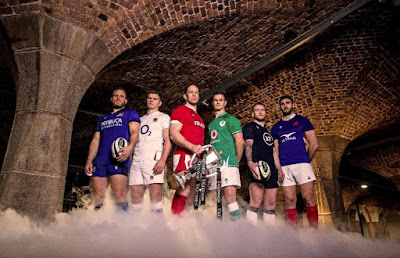 The 2020 GUINNESS SIX NATIONS and 2020 Women’s Six Nations was launched in London today, with all 12 captains and coaches in attendance to kick off two months of thrilling rugby.

Week one will see the England teams travel to France, the Welsh host the Italians, and Ireland welcome the Scots in a thrilling weekend of sport that will set the tone for the rest of the Championship and give fans the first glimpse at the next generation of national captains and head coaches including: Fabien Galthie, Andy Farrell, Franco Smith, and Wayne Pivac.

In week two, Scotland welcome the “auld enemy” England to Murrayfield for the hotly contested Calcutta Cup. Whilst Wales travel across the Irish Sea to take on the might of the Irish teams and it’s an all continental weekend with Italy visiting France.

To mark the 2020 Championship and these mouth-watering games, GUINNESS is launching a host of experiences that celebrate the friendly rivalry that binds each nation together in the union of rugby. The Title Partner is inviting spectators across the home nations to come as rivals but leave as friends and engage in new fields of contest that mirror the fierce competitiveness of the Championship over the next two months. The exclusive experiences featuring food, fitness and some of the fans’ favourite traditions, will be unveiled as the championship progresses, offering people across the home nations the chance to make the GUINNESS SIX NATIONS truly unforgettable.

GUINNESS will introduce ‘A Performance to Remember’, a first for a sports sponsor by presenting commemorative bottles of Guinness Clear (100% H2O) to players who receive Player of the Match Awards throughout the Championship. This will put the message of moderation at the heart of a sporting institution and key celebratory moment, because swapping GUINNESS for water or choosing not to drink alcohol at all should be celebrated.

Bringing the Championship to as many fans as possible across the home nations, GUINNESS has partnered with multiple pubs, bars and event spaces across England, Scotland, Wales and Ireland to create the perfect environment for die-hard fans and occasional rugby flirts to enjoy each match. Spaces include The Pear Tree in Edinburgh, Depot in Cardiff, Flat Iron Square in London and the Camden in Dublin, all of which will be kitted out for the perfect rugby-watching experience that goes beyond the borders of sport.

Mark Sandys, Global Head of Beer at Diageo, commented: “The GUINNESS SIX NATIONS is one of the landmark events in the sporting calendar and in our second year as Title Partner we wanted to use the Championship to celebrate the friendly rivalries that extend across the rugby union. By introducing new fields of contest we want rivals to become friends who will raise a pint to one another in commiseration and celebration when the final whistle blows. There’s few other sporting events more perfectly positioned to celebrate our similarities and our differences, and as a brand so synonymous with rugby, GUINNESS will be at the forefront of this celebration.”

Following plenty of on field drama in Japan, the GUINNESS SIX NATIONS 2020 is set to be one of the most enthralling sporting spectacles this year. It kicks off with Wales v Italy in Cardiff on February 1st.
at January 22, 2020

POWER SHIFT I’ve all but exhausted ways to kick the can that is this writeup down the road as much as I could.  A combination of the Sunday ...