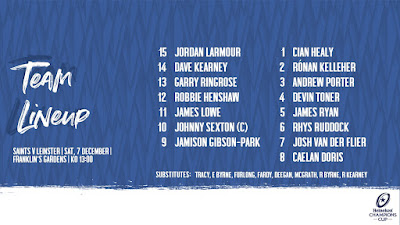 First in Premiership hosting first in the Pro 14...don't let anyone try to tell you this is anything but the standout fixture in round 3 of the 2019/20 Heineken Champions Cup.

I'm pretty sure I ran out superlatives for Leinster's performances when we were at five wins to start the season so you can be sure the well is completely dry when the count is at nine.  As the saying goes, all good things must come to an end, and having watched the Saints a few times this season, this could be the time.

Take last weekend's derby against Leicester, for example.  Maybe the Tigers have had their problems of late, but they started with a team that included names like Manu Tuilagi, Johnny May, Ben Youngs & Dan Cole.  And what's more, the Saints were without World Cup returnees like Dan Biggar (who has had a miraculous recovery in time for Saturday) and Courtney Lawes (who hasn't).

Well thanks partly to individual talent from the likes of Naiyaravoro and Proctor, but mostly to an abundance of confidence throughout the 23, they easily overcame their rivals to record their fourth win from five to add to their pair of European wins.  So while a back-to-back series against the four-time champions was never going to be the easiest prospect for them, they'll definitely fancy their chances, especially with the first match being in Franklin's Gardens.

I can't help feeling that if they're going to defy the bookies who have Leinster winning by six at the time of writing, the Saints will need to build a lead in the early stages.  We have proven time and time again this season that the longer a match goes on, the more difficult it gets to score against us.

And if you had to pick an outhalf who wouldn't be daunted by facing Johnny Sexton, you could hardly choose better than Dan Biggar.  He has come out on top against him an many a big occasion over the years, so we'll need to be on our guard from the kickoff.

But having talked up the Saints up to this point, it's about time I harped on the quality in the Leinster lineup.  The starting name that jumped off the page was Jamison Gibson-Park, definitely the correct call based on recent form, and he's up against Cobus Reinach, who may not have been a starter himself for the Springboks in Japan but easily could have if required.

Elsewhere in our backline, our Henshaw/Ringrose centre pairing is together again and will definitely get better as the season goes on.  Jordan Larmour returns to full back as Rob Kearney wears the 23 jersey again; there's better news for his brother Dave who is on the wing with James Lowe opposite.  Positively oodles of attacking options there of which Sexton can avail.

As for the forwards, there's yet another massive boost of confidence from the coaching staff for both Rónan Kelleher and Caelan Doris, and based on their performances this season their names don't look out of place alongside the likes of Healy, Toner, Ryan, Ruddock & JVDF.

But it's in the bench where this Leinster team seems to pack the most punch.  All eight can offer a lot to any final quarter, but for me it's the names Furlong, Fardy & Deegan that do it for me.  The humble talk among the boys in blue from Leo Cullen to many fans suggests we'd be happy to leave Franklin's Gardens with a bonus point, but the matchday 23 reads like one determined to do much better than that.

When it comes to predictions, as much as I fear the wrath of the rugby gods, I can't help but have faith in both Leinster's form (particularly on defense) and superior European experience, though this should be our biggest test of the season to date so I'm calling it a bit closer than the bookies.  I reckon the Saints will do all they can to get the most out of home advantage but I'm backing us to prevail by 3-5pts.