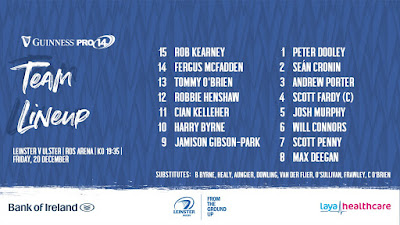 This week's HarpinOnRugby podcast featured a chat between myself and fellow Leinster season ticket holder Conor Cronin on our season so far.  As much as I want to use these pages to be able to criticise the boys in blue when I think it's warranted, after a start to the season where we won 11 out of 11, I didn't see the harm in using just one episode to celebrate that unbeaten run.

We recorded on Tuesday evening but I wasn't able to edit it until 24 hours later, although it dawned on me that if I didn't get it published as soon as possible, it might be made to look a bit silly should things go wrong against Ulster on Friday!  Then I saw the lineups.

I know I'm not the only one who wishes these seasonal interprovincials could be played with full strength squads.  In fact personally I'd go further because I believe the season could be laid out in such a way as to encourage teams to put out their best squad every week regardless of the opposition.

But the reality of the current status quo is that when three rounds of Pro 14 matches are sandwiched between crucial Champions Cup fixtures, not to mention the 2020 Six Nations kicking off in February, it's easy to understand that something has to give and a raft of changes have to be made.

While it's true that both Leinster and Ulster have had perfect starts in Europe from a win standpoint, the fact remains that the whole concept of "resting players" means something completely different to each province.  Tonight's RDS visitors include four uncapped players in their ranks, while ours has but one in Tommy O'Brien, and in his case, were it not for injury he'd definitely have a senior appearance by now.

Probably because it's a home match, Leo Cullen has been able to include such high profile names as Scott Fardy, Robbie Henshaw and Rob Kearney, as well as welcoming back Sean Cronin who will no doubt be keen to play his way back to the top of our hooker pecking order after Rónan Kelleher's impressive run (and to be fair James Tracy has also done well).

Also the latest pull of the Leinster back row one-arm bandit has thrown up another cracking trio of Will Connors, Scott Penny and Max Deegan, each of whom is well capable of winning man of the match tonight.

Pulling the strings at out half is Harry Byrne, who is almost like a veteran to me at this stage having watching him so much with Ireland U20s, Leinster A and of course the full side in this calendar year.  From what I have seen, the pressure to perform in front of a home crowd (as well as the bookies' expectation of a 26-point margin) shouldn't hinder the youngster.

The back three matchup should be interesting.  We've the experience of Ferg and Kearney The Elder along with Cian Kelleher, while the Ulstermen can certainly do damage with Lyttle, Gilroy & Kernohan.