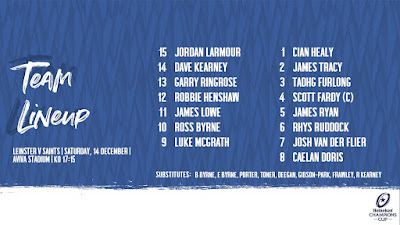 What can I say here?  Seriously - after ten wins from ten matches, including performances more convincing in the matches we thought we could lose than in the ones we thought we'd win comfortably - how can I possibly wish for / expect / demand anything but more of the same?

Sure - we have come out of every match saying there was some room for improvement, but purely from a fan's point of view, my only complaint about our record to date this season is that it makes these preview harder to write each week, which I know of course is one of the better complaints to have.

There are a few tweaks to the lineup from last week, some enforced, some not, but for the most part it's good to see confidence shown in those who did so well in Franklin's Gardens.  As I said in my writeup, while the likes of Messrs van der Flier and larmour had stand out performances, many others did well below the radar like James Ryan, Caelan Doris and Dave Kearney and they will all be given a chance to shine before an Aviva Stadium crowd which seems to be headed well past the 40k mark at the time of writing.

Obviously the most significant change is at halfback, where Ross Byrne steps up for the injured Sexton and Luke McGrath is given the chance to prove himself after playing second fiddle to JGP at Franklin's Gardens.  It will make for a different approach for sure, but not necessarily an ineffective one.  Be ready for an accurate crossfield kick or two aimed at a pair of wingers more than able to fully capitalise.

In the pack Scott Fardy swaps places with Devin Toner and gets a captain armband into the bargain, while James Tracy steps up for the unfortunate Rónan Kelleher and Tadhg Furlong returns to tight head duty.  As for our back row...could this be the first time we have played the same trio two weeks in a row this season?  This  calendar year?  Beyond that?  I'll get my crack research team on that pronto.

Northampton on the other hand have rung the changes.  They may be first in the Premiership, but they are only 5 games into their season and after last week's wake-up call I suppose I can't blame them for considering the following week's trip to Sale Sharks more of a priority.  But one thing is for sure - I've seen enough of Dan Biggar over the years to know not to underestimate any team he's in too much.

I guess that only leaves me to harp on the occasion itself.  The December trip to HQ is always special, even more so when they stopped giving the fixture wacky names like "Fever in the Aviva".  It's always a special occasion that markets itself and this should be no different, if perhaps a tad chilly given the evening kickoff.

The bookies have Leinster winning by a whopping 26 points.  Again - what can I say against that based on what has gone before?  I'd take a much lower winning margin once it came with a try bonus and no injuries, but then again it could serve as a challenge to the lads to do as much as they can to replicate, if not better, last week.  Still, I'll go for an 18-20 point margin.