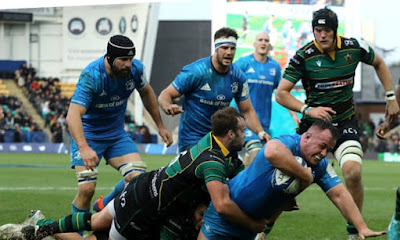 TEN OUT OF TEN

I love crunching numbers as much as the next rugby nerd, but you always have to be wary.

For example - on first glance it looks like the Northampton Saints kept a tight reign on discipline on Saturday since they 'only' conceded six penalties.  But that doesn't take into account the multiple occasions Leinster scored a try after multiple phases during which there were multiple penalty advantages, not to mention a nailed-on yellow card the ref chose not to show Cobus Reinach for playing the ball on the deck.

Then there's the possession and territory stats.  Given the final score, you might think that 59% and 58% respectively seems about right for Leinster's overall dominance yet the Premiership-leading Saints actually had several front foot ball opportunities in our 22 and were unable to turn them into tries beyond the 7th minute, and points beyond the 30th.

Which leads me to arguably the most deceptive numbers of all - tackling stats.  Percentage-wise, Northampton actually did marginally better.  Four of their players made more tackles than any of Leinster's.  17 of our matchday 23 missed at least one; 8 missed more than one.  But none of that comes close to telling the tale of the 80 minutes.

In my preview, I reckoned the home side needed to build a lead in the early stages if they were to have a chance of winning; well, the first few minutes could not have gone worse for them.  On their first possession, they grubbered one through into our 22, where Jamison Gibson-Park had to tidy.  Did he knock it on?  It certainly looked at way in real time.  Still, the referee chose to play on as the scrum-half was swamped by Saints chasers and the ball was turned over.

In his hurry to catch us on the hop, Springbok 9 Cobus Reinach tried to fling one towards the centre but managed to fool everyone except Garry Ringrose, who read the miss pass brilliantly to collect and suddenly we were the ones looking to avail of broken play.

Before the clock had hit the three minute mark James Lowe was touching down under the posts, having sprinted away from chasers, having received an offload from Jordan Larmour, who had accelerated through half a gap in the wide cover.  The TMO did look at that JGP touch but somehow despite the fact he made contact, the ball continued to roll backwards and the try was allowed to stand.

That would have been devastating to most sides against the four-time champions, but from what I have seen of Chris Boyd's Northampton this season, he has them playing with buckets of confidence and despite the final score you could see it in their play for the remainder of the match.  When Rónan Kelleher was pinged for sealing off at halfway they had their first chance for an attacking set play and while that was denied by a James Ryan lineout swat, their second went much better after JGP's touch clearance failed to get out of the 22.

What transpired was exactly what I had expected from them in the opening quarter.  Leinster's defending is renowned across the continent but even that can be stretched with the right amount of accuracy and strength.  The lineout, crash ball by full back Tuala and a further strong carry by co-captain Teimana Harrison had us drifting in one direction before the ball was quickly sent the other way where Tuala had made himself available to take and plant down in the corner.

Tack on a sublime touchline conversion by Biggar with the sun in his eyes and the sides are level again.  And there were no surprises when he knocked over a further three points after a few minutes of midfield sparring.  This looked to all intents and purposes like it was every bit the epic European battle between domestic league leaders that it promised to be.

But having worked so hard to negate our early advantage by nudging in front, up stepped Larmour, or should I say side-stepped.  After one of his "would step around you in a phone box" moves got him another line break (his stats certainly don't lie - an average of 10m per carry and not all of them from deep despite the 15 on his back) and while he had a Kiwi in support again, this time it was JGP not Lowe and he couldn't back himself to make it to the line.

Not to worry; we were about to display the most fundamental difference between the two sides on the afternoon, namely an ability to finish via phases from 5m out.  While for the Saints those situations repeatedly ended in nothing more than three points for the rest of the match, for us they repeatedly ended in tries.

On this first wave it was Ruddock who spun from a ruck and crashed over the line, but the real story of this five-pointer is one of support.  Not content with his line break, Larmour provided JGP with excellent clearing out to keep the play going and eventually the final push was given by both starting locks Ryan and Toner.

Again, Northampton did anything but let the rapid loss of their lead get to them as they had it back by the half-hour mark, although I found referee Alexander Ruiz's breakdown calls to be a bit inconsistent.  He pinged first Doris then Porter for not releasing after a matter of seconds while we were on the attack yet when it was Doris doing the latching down the other end, he let it go for a while before actually giving Biggar the chance for three points ("knee on the ground?"  not so sure...).

But now it was our turn to lift our heads and when what first looked like another JGP knock on was shown to be that Reinach no-no that should have seen him sent to the naughty step, we ended up not needing the extra man as this time it was Andrew Porter getting it over with his fellow prop Healy providing the helping heave.

They call them 'Championship Minutes', namely the 5 or so before and after the break, and seldom in a massive European encounter has a visiting side made more hay from them.  The second half had barely begun when Larmour was off again on one of his jaunts to set us up in their 22 before a dozen or so phases were capped off by Healy spinning over to nail down the bonus point.

Unfortunately the sequence wasn't entirely perfect for Leinster as in passing to Larmour, Sexton fell awkwardly after being tackled by Procter (to be clear - while our skipper did get a borderline late-ish hit or two throughout the match, this wasn't one of them) and had to leave the field.

And so it was his replacement Ross Byrne who knocked over the extras and it wasn't long before he was dotting down himself after Caelan Doris intelligently spotted a gap up the middle of a breakdown to get it close to the line.

So just like that, the Saints were 3 scores behind and to make matters worse their co-captain Alex Waller saw yellow for a tackle off the ball in the build up to try number 5.  Once again, the stats don't tell the complete story because even though we added another couple of tries from this point, they only came after the home side threw the kitchen sink at us, even a man down, to try and get something from the dire situation.

My apologies to Mr Taqele Naiyaravoro if he gets the impression I'm calling him a kitchen sink, but the fact is they did go to him heavily during this middle portion of the second half.  And each time he was allowed to run onto the ball, our defensive cordon definitely did bend, but it never broke.

Time and time again they were thwarted by knockons here, a choke tackle there, a rip free in the tackle somewhere else, and more often than not it was Josh van der Flier doing the thwarting.  Of course it had to be an overall team effort on defence, but even if the Red Capped One hadn't deserved the man of the match award on this day (he most certainly did) he could have gotten it for his combined performances over our three European matches so far.

Honourable mentions for the day go to Larmour of course, pretty much the entire pack for the heavy lifting close to the line, but particularly James Ryan for popping up with valuable contributions when needed despite staying under the radar and also Sexton for some good captaincy when it came to dealing with the ref.

And while the Saints to their credit kept trying to climb the mountain our defending put before them, in the end our bench, which we originally thought could prove the difference in the result, in the end just made a difference in the margin as late tries from Luke McGrath and Ed Byrne (also from close range) added insult to injury.

Once more I'll say that I'm almost afraid to be too complimentary with my writeup, but this was as close to a perfect away performance as you can get in European rugby, especially when you consider the home side was one very much in form.

The post-match comments from the blue-goggled masses certainly agreed - for many of our previous seven Pro 14 matches and two Champions Cup wins, the praise was mostly softened by a "Well it wasn't perfect but...".  Not on this occasion though.  Of course the coaches will always find areas for improvement, but even the most finicky of bloggers have to admit that it has been one of Leinster's most impressive ever starts to a campaign.

I have to say I was very disappointed to read that in his post-match comments Chris Boyd was unable to avoid going to the well-worn narrative about Irish provinces resting players while the Premiership supposedly get "asked questions" every week.  For one thing, Northampton comfortably beat rivals Leicester last weekend (while resting players like Biggar unless you believe he had a one-week toe injury).  For another, while I'd expect that angle to be spun in the English media, it never sounds good coming from a coach who has just lost.

At the time of writing Sexton is ruled out for the return match at the Aviva but hopefully he won't be out too long after that.  With healthy leads in the pool (5pts after 3 matches) and Pro14 conference (8pts after 7), while I'm way too superstitious to give Leinster a perfect ten out of ten for the season so far, given that is also our win record, I could come pretty damn close.  Roll on next Saturday evening.  JLP


BELOW IS AN AUDIO VERSION OF THE ABOVE ARTICLE