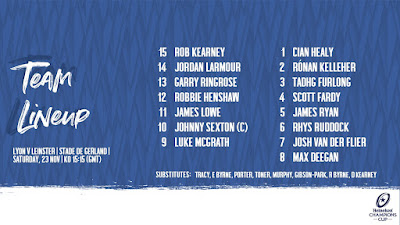 I've said it on these pages before but it's worth saying again - when your worst result & performance in seven matches to open a season was an away shutout victory, you've had a very good start.  So it follows that you have every reason to be confident going into your eighth.

Of course you have to take the opposition into account, though I have to admit when it comes to Lyon, the information to hand is, shall we say, varied.  I have watched them play twice this season, and they were awful both times.  That said, both were away matches and we all know the Top 14's reputation for those.  THAT said, they showed an alarming amount of ill discipline on both occasions.  THAT said, their opposition for those matches, Clérmont and Northampton, have both been doing well this season.  THAT said, Lyon have won every single match that I didn't get to watch, and currently sit 1st in the Top 14.  THAT said,  it could be down to the fact that they only sent two players to RWC2019 and could change now everyone has returned.

Like I said, it's varied.  If I had to name one point that tipped the scales in favour of an assumption that they will play well on Saturday, it's the fact that they will surely be happy enough to be playing Leinster at home first (as will Northampton in December).  I guess what I'm trying to say is that we can't learn too much from our opponents this weekend, so going on the evidence of our own seven matches so far, if we can keep up those kinds of general standards, we should be ok.

As for the Leinster lineup, while Joe Tomane and Rory O'Loughlin have done well in our centre channel up to this point, it's great to see Henshaw and Ringrose back together again after the disappointment against the All Blacks.  They must be chomping at the bit to work together again, and Garry showed a lot of that last week with his man of the match performance that did not only stem from his hat-trick of tries.

It's also good to see Rob Kearney back in the starting lineup, though perhaps his brother won't fully agree for this match as he was sacrificed to the bench to allow Larmour switch to the wing.  Still, I think Jordan might be better suited to a wider role, especially when hunting for line breaks off set pieces.

When it comes to the pack, Devin Toner also moves to the bench with Scott Fardy stepping up.  I thought the Wallaby got involved in a couple of needless penalties last week (he wasn't alone in fairness) and if the French outfit have discipline issues we certainly don't want to have too many of our own.

Another returnee that's more than welcome is Tadhg Furlong.  This could well be a very physical encounter and we'll need all the proven ball carriers we can get.  And alongside him in the front row, Rónan Kelleher has more than earned a second European start in a row and who's to say he won't find his way to the try line once again.

On the bench, before last week's opener against Benetton I pointed out how Jamison Gibson-Park is just the kind of player you want to be able to add to the mix if you really need a score in the closing stages - hopefully if that's the case here it will be more for bonus point reasons than actual victory ones.

The bookies have us winning by 5 points, which suggests this one could tip either way.  Like I said, it is imperative that we maintain the standards we have shown so far in this campaign, particularly on defense.  I wouldn't be so sure about us getting tries from our first two possessions like last week, but if we can keep Lyon's side of the scoreboard low in the opening half, we definitely have enough experience with Sexton and Lowe, not to mention young try-scoring promise with Deegan and Kelleher, to get the job done.

For that reason I will also go for us to prevail, also with a narrow margin - I'll say 4 just to be different.  Though going back to my theme from earlier, the type of French team that shows up will definitely play a part in how we get on.  JLP