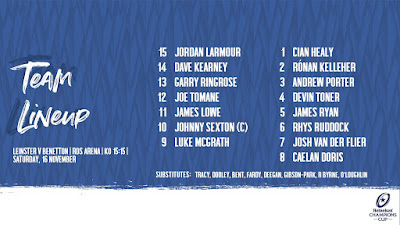 No better time to bring back the previews after my extended sick leave, eh?  Heineken opening weekend is always an exciting one.  All the possibilities, all the permutations, all the big matchups - a wonderful time to be a rugby fan.

Since I haven't been doing a lot of harping this season so far, I haven't really had a chance to look at Leinster's pool-mates up to now, so I'll try to incorporate that into this article by starting with my take on the most recent outings (for which I could get footage) of Benetton, Lyon and Northampton - I'll approach them in that order since that's the one in which we play them.

BENETTON  [based on Scarlets 20-17 Benetton]

Of course Leinster have already faced Saturday's opponents this season, opening our campaign with a somewhat fortuitous 32-27 victory at the Stadio di Monigo, but you don't need me to tell you there's a much different context to both teams then than there is now.  So I'd much rather look at how they did in Llanelli.

The Italians were extremely unlucky not to get anything out of this one.  They led at half time, they thwarted their hosts again and again on attacking opportunities (although the Scarlets kept spurning clearly kickable penalties) and it was only a senseless penalty right at the death that gave Dan Jones the chance to pinch the victory.

With the ball Benetton seemed eager to offload despite the persistent rain and if the Leinster D is as stingy as it has been this season, they will need them to stick.

One thing is for sure about Saturday's visitors...they should have little or no fear about coming to the RDS based on recent seasons.  Sure, things are different when it's Europe we're talking about and there can definitely be caveats given to those previous two encounters.  But you take any positive you can in these situations and coach Kieran Crowley has done extremely well with the team since taking over and we can be in no doubt that they will be well prepared.

Obtaining footage from the Top 14 hasn't been easy this season so I had to resort to Lyon's Round 8 visit to a very soggy Stade Marcel de Michelin.

If they can play like this when we meet them in Round 2, I would be delighted, but this performance comes with a lot of asterisks.  First and foremost, this was a French away performance in the Top 14, which we all know means they tend to power down a gear or two given how they have a thousand regular season matches.

Next, like I said, the conditions were horrible but while both sides were prone to mistakes on the day, Clérmont were definitely more up to the challenge.  But Lyon's biggest problem wasn't handling errors, it was discipline.

The home side scored 8 penalties and missed a couple more, plus they spent well over half the match with at least a one-man advantage as Aussie flanker Liam Gill earned himself a second yellow card while their prop was already on the naughty step.  And believe me, all sanctions were deserved.

Personnel-wise, I reckon Jonathan Wisniewski will be keen to lock horns with Johnny Sexton having spent time in his shadow when at Racing, and for me he was their outstanding player against Clérmont.  In the pack, while he wasn't great in this outing you couldn't ignore the sight of Mathieu Bastareaud in a number 8 jersey!

Obviously since this was their one defeat from nine outings in a Top 14 campaign where they still find themselves top of the pile, I wouldn't read a whole lot into this result - we'll see if their away form is any better when they travel to Franklin's Gardens on Sunday.

NORTHAMPTON [based on Bath 22-13 Northampton]

The Saints also got off to a good start this season and looked good in a home win over Harlequins I got to see.  And in this pre-European trip to the Rec, they jumped off to an 8-0 lead that made it look as though they were heading for a 4th win from 4 to remain top of the Premiership.

It seemed that the key to their success was the impressive kicking record of fly half James Grayson and the sheer power in the wider channels of Taqele Naiyaravoro.  But as everyone who has watched the European level over the years will attest, you need a lot more than that at the highest level and Bath clawed their was back to a 10-8 lead and even when their winger Aled Brew was sent off, their pack over ran Northampton's to force two late yellow cards which saw them grind out a victory.

So it remains to be seen how they'll fare in Europe, although a home start against Lyon gives them a good opportunity to put themselves in a good position before they travel to Italy the following week.

As I mentioned in my Connacht writeup last Monday, this pool seems a much tougher proposition now than it did when the draw was made back in July.  We already knew Benetton were far from the whipping boys of years gone by, and in the meantime Lyon and Northampton have gotten off to good starts in their league campaigns, plus both will feel they have a slight advantage in that they get to face Leinster at home first.

That said, Leinster's start to the season has been decent too.  When your worst display in six matches was still an away shutout victory, you can't be doing all that badly.  Factor in the host of Japan returnees determined to put the disappointment behind them and we still have to be favourites to win the pool; we'll just need to maintain the high standards we have shown so far.

How many years did we as Leinster fans rue the fact that we somehow avoided Benetton in the Euro pool draw?  Now they're able to win at the RDS and reach the Pro 14 playoffs, it has become a classic case of "careful what you wish for".

Yet all superstition aside, there's no hiding from the fact that we're not only firm favourites tomorrow, but also to lift the trophy itself.  That's just something we have to accept, and to be fair it's a mantle we have carried reasonably well over the years.

Looking at our first matchday 23 for this tilt at a fifth star, there is certainly some disappointment in the absence of some World Cup names like Rob Kearney, Robbie Henshaw and Tadhg Furlong, particularly when all but Henshaw we unaccounted for in the injury update earlier in the week.  Still though, these things can be overlooked not only because of the quality of those replacing them, but also those elsewhere who have clearly been rewarded for strong showings in the Pro 14 since the season began.

Clearly the most mercurial rise has been that of Rónan Kelleher.  With Sean Cronin still unavailable, there wouldn't have been too many eyebrows raised had James Tracy gotten the 2 jumper given his experience but Kelleher's abilities in the loose and particularly on the back of lineout/mauls cannot be ignored.  This is definitely a great stage for him to show he has potential for moving even further up the Irish rugby ladder.

Next there's Caelan Doris.  We were so busy fawning over the excellent display of Will Connors in Galway that we almost forgot that pretty much every 'next gen' Leinster backrow has had at least one stand out performance this season.  Josh Murphy and Max Deegan have all but shaken the 'next gen' status yet still deserve a mention, while Scott Penny and Doris have also impressed greatly.

Yet again, had Leinster gone a 'safe' route with this matchday squad, like, say, put Scott Fardy at 6, JVDF at 7, Ruddock at 8 and used Doris on the bench, there wouldn't have been much surprise.  But Caelan got the nod for 8 which must be a massive boost to his confidence, and he'll get a decent test on Saturday from his opposite number, the NZ-born Tongan international Nasi Manu.

As for Joe Tomane - he took a lot of stick last season, some of it from me because I got a sense that he played as though he wasn't quite clued in to our way of doing things.  Well that certainly cannot be said for him based on the opening weeks of this season and he should be well placed to do quite a bit of damage in the 12 channel on Saturday.

Halfback of course will be key.  Luke McGrath and Johnny Sexton will surely be extra keen to make a statement, especially with the latter being captain.  Although many observers wince at the sight of box kicks and other forms of aerial tactics, it's worth noting that Treviso full back Jayden Hayward spilled a few against the Scarlets (conditions weren't great but he should still have done better) so that could be an early avenue for getting at our visitors.

But like I have said pretty much every time before Leinster or Ireland have taken to the field in recent years, the key will be in our defensive structure.  If we can continue to frustrate the opposition with the ball, there's no limit to the amount of damage we can do with it ourselves, especially with a back three as potent as James Lowe, Dave Kearney and Jordan Larmour.

And the biggest feature of that defensive prowess has been the way nothing seems to change when we go to the bench in the second half; in fact if anything the fresh legs seem to make us stronger.  Hopefully we won't need too much in the way of scores on Saturday in the closing stages but if so, Jamison Gibson-Park won't thank me for pointing out he's exactly the type of scrum half you need in those situations.

Overall it's hard to see beyond a home win - the bookies certainly agree with their spread of 23 points in our favour.  My absence from the ruggersphere hasn't made me any more daring when it comes to making predictions so I'm going to come down inside that margin and say I'd be happy with a 14-17 point victory, once the bonus point and sensible squad management is included of course.  Still, if this team can welcome back the RWC returnees firing on all cylinders much like it did last week, there's no limit to where we can take it.

Here's to another great European day for Leinster - hope to see you there!  JLP