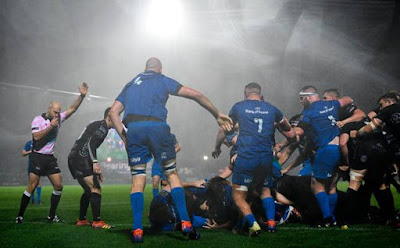 Hopefully I'll reach a stage soon where I don't have to open every article with "It's great to be back" after my recent illness but since this was actually my first trip to the RDS this season I guess I should go there one last time.

And I'm not lying - it really was great to be back.  All felt right with the world again, seeing familiar faces around the ground, taking my seat, setting up my laptop, enjoying the Leinstertainment, tweeting my thoughts.  Again, many thanks to all who have offered best wishes over the past four or five weeks.

When it comes to the match itself, this may sound odd but having watched it back I'm inclined to summarize it like this : "It was quite possibly the worst fiftyburger I've ever seen Leinster put together."  I mean, that really does sound like the worst kind of arrogance, doesn't it?  Yet I actually mean it.

Over the 80 minutes, we made a lot of mistakes, many of them understandable given the conditions, though having said that, we did seem to commit to a high-risk style of attack so in a way we were inviting the knockons.

Perhaps a more fitting scoreline would have been 36-15, which is what you get if you take away Harry Byrne's try, on account of the fact that Richard Hibbard did seem to be blocked by the referee (I'm not sure he'd have stopped Harry's strong line anyway, but still a scrum back would have been a decent call IMO), and also James Lowe's second try, which was something of a 'gimme' as the Dragons were trying to force things to make their side of the scoreboard more respectable and ended up practically handing him an easy run in from halfway.

And I suppose if we're docked points for fortunate tries we could also review the Dragons' first one - however impressive the opportunism of Jordan Williams may have been to dive over the line like he did, the way our defence was set the only way he would have had such an opportunity was as a result of a couple of fortunate ricochets, which is exactly what happened.

But don't get me wrong - this was still an impressive outing for the boys in blue, one that definitely earned the maximum match points and also atoned for the previous week's ugly win in Parma.

What caught the eye more than anything was the clear determination to put that freak 3-0 scoreline behind them as quickly as possible.  I liked the lineout plan in particular - with skipper Devin Toner calling the shots, not only did he frequently go to his fellow lock and first-time starter Ryan Baird, but the set plays often involved "one off the top" followed by long miss passes from JGP right into our centres - extremely brave and confident choices despite the fact that they often came to nought.

But with an eight-try haul, of course, many times the moves did come to something, like on just five minutes when it was Michael Bent showing that for props, tries can be like buses.  After securing only his second try for the province against Edinburgh after a six-year gap, he followed it up with another by powering over the line after a series of pick-and-goes.

It took as a while to get our second but thankfully it was worth the wait.  Scott Penny has shown himself very capable when it comes to traditional 7 duties and also finishing off 5m lineout/mauls, but on this day he showed us his ball handling skills to great effect, taking a pass in the wide channel from Rory O'Loughlin before shovelling a perfect offload inside to Dave Kearney who went over.

Next came a phase which included two of the three fortunate tries I mentioned earlier;  first from Jordon Williams and then Harry Byrne's, and it wasn't until the second half that we secured the bonus point thanks to a more conventional close lineout that was finished by Ronan Kelleher (another who seems to find himself on the end of these plays more often than not).

Try number five was by far the pick of the bunch.  Leinster fans have gotten very used to Ross Byrne kick passes finding Dave Kearney's bread basket in recent years but on this occasion it was Harry showing his radar to be just as accurate.  Next we had Conor O'Brien, eager to show he's more than a strong crash ball option, waving his arms furiously for a long pass inside which duly came before he quickly popped a simple one to Penny inside him.  Once again the flanker showed good technique in getting it back to Kearney who left several would-be tacklers for dust to secure his second.

It was another good combination out wide that got us try number six...again Rory O'Loughlin involved with his full-back Jimmy O'Brien knowing exactly when to join the line providing the extra player to allow James Lowe through - the Kiwi would have been itching to get on the scoresheet and there was no stopping him from halfway.

Number seven was also a bit lucky though to be fair it did also come from enterprise...a little grubber through from O'Loughlin forced Dragons 10 Sam Davies to tidy and he wasn't able to get control of the greasy ball which meant it went over the line for young scrum half Hugh O'Sullivan to pounce on it for his first Leinster try.

To the visitors' credit, they never gave up and they really pushed for scores in the final quarter.  Like I said, they pushed a bit too hard at one point when they gifted Lowe his second, but it did reap a reward right at the very end of the match and having seen a couple of their outings this season, like a win last weekend over Glasgow, they do look like a club that is keen to improve.

But for Leinster's part, it's hard to find too much fault with an opening five rounds which have yielded 19 points out of 20.  That does of course come with caveats, not least of which is the fact that we are yet to meet any of the principle challengers from our Conference (Cheetahs, Ulster, Glasgow).  And with Connacht playing some decent rugby, this makes our trip to Galway next weekend a perfect opportunity to test where we really stand, as well as giving Leo & co the chance to start feeding World Cup players back into the matchday squads.

Apologies for this writeup being both later and shorter than usual - still finding my way back into my routine here at Harpin Manor but after all that has happened in recent weeks, I'm more than happy to see things on an upward curve, both for my health and for Leinster Rugby.   JLP