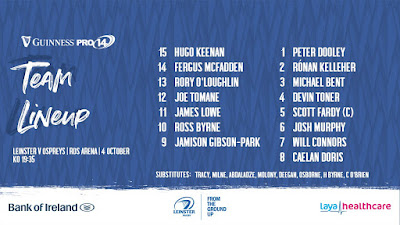 It has been a crazy Friday here at Harpin Manor and that's even without Lorenzo ever coming to pass as badly as feared, though perhaps the tail end of it was responsible for the power cut that took an hour and a half off of my writing schedule.


Anyway...the new plan is to ditch the video for this preview, make it a written one instead and leave the Russian writeup to Saturday.  It might be better that I give myself an extra 24 hours to mull over Thursday's events in Kobe anyway...

So now it's all about the return of Leinster Rugby at the RDS.  The first home game of the season is always an exciting occasion, especially for season ticket holders, and even more especially when it comes after a handy (if fortuitous) five points away from home in round one.

This is a fascinating lineup we have selected for the visit of the Ospreys.  After a very satisfying outing for our back three in Treviso, we now go with a completely different trio yet somehow it takes nothing from our prospects talent-wise, even with Jordan Larmour in Japan and both Cian Kelleher and Barry Daly injured!!!  That is some squad depth, and no doubt there will be an extra buzz around the RDS whenever James Lowe gets involved.

We do have stability in the centre channels, and Tomane/O'Loughlin is a very promising pairing once they hit their straps.  They will be tested by the likes of Scott Williams tonight for sure, but they should be well able.

Pulling the strings there's JGP and Ross Byrne.  The freshly-Irish-qualified Kiwi (great to see himself, Lowe & Fardy in the same Leinster XV isn't it?) didn't have his best outing last week, although his pass to put Kearney The Younger over in the second half was sublime.  He'll be looking to show more leadership tonight.

In the pack we might be facing more of a contest from those pesky birds, but with Toner and Fardy in the engine room (although I wouldn't be surprised if Big Dev was asked to sit it out in case a plane ticket east becomes available) we should have enough especially at the set piece to gain an advantage.

On our bench I'll be most interested in seeing Conor O'Brien play a part in the last half an hour - I have a feeling this could be a season when he makes a real breakthrough.  Also should Harry Byrne replace his brother for a second week in a row it will be his first appearance at HQ.

When it comes to our visitors, there are some experienced heads in their lineup, with Dan Lydiate leading them and playing at 4, Dan Baker who is always up for these matches and on the wing, Keelan Giles who can make the most of any space he can find.

But overall with my predicting hat on I can't see too far beyond a home win tonight, maybe not by the 23-point margin the bookies are counting on as the conditions are meant to be unkind.  Perhaps a margin of something like 14-16 is more realistic though I would certainly be hoping for a bonus point as every one we can put in the bank during this phase of the Pro 14 is crucial, especially against a Conference rival.

So hopefully I'll see you down in D4 this evening and also that the rugby doesn't let the weather put a dampener on what is always a great occasion.  Come on you boys in blue!!!! JLP

PS As I'm writing the Leinster A team are kicking off in their final Celtic Cup round robin fixture, over in Galway against the Connacht Eagles, who are chasing Ulster for the right to join us in the final.  Best of luck to them - from what I have seen there's yet another crop of good talent heading on down the assembly line!