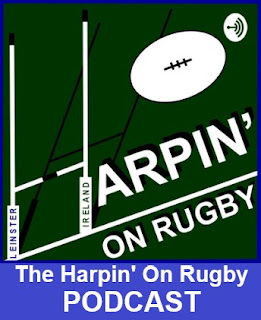 In this week’s pod...almost as though I planned it this way, episode 14 is focusing on the opening round of the Guinness Pro 14.  Instead of a Harpin Point I’m going to give you an audio version of my Benetton v Leinster writeup, then I’ll have some 80-word reviews of the Irish provinces before my Back & Forward chat is with Ulster fan Kristian Ross and we’ll go through all of the Round 1 matches in the Pro 14 as well as looking ahead to Round 2.

An audio version of our Benetton v Leinster writeup which can be found here.  Also there's a bonus at the end as we hear Leo Cullen's post-match thoughts courtesy of Leinster Rugby TV.

Our guest this week is Kristian Ross, Ulster fan and curator of the @IrishRugbySupp Twitter account.  We have a look through the opening round of the Guinness Pro 14.

...including a snippet from Ciarán Duffy's recent interview with Leinster's Hannah O'Connor, plus our Final Whistle quote which is from Jim Neilly.


If you want to be part of a future pod, you can leave a voice message by following this link, or alternatively just get in touch by email at paganoblog@gmail.com
at October 02, 2019