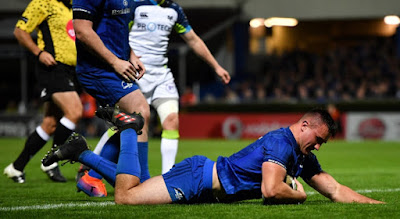 The only reason I use the term "man flu" to describe my condition over the weekend is that I hate it so much, I want to get it out there ironically before anyone else trying to do it seriously and possibly earns themselves a backlash of biblical proportions!

Anyone that knows me will attest that "I don't do sick" so it would take an absolute monster of a virus to bring me down, and for the past week or so it would seem I met my match, although even then I didn't make the call to sit out Leinster's home opener for the first time in over a decade until the very last minute.

So as you can probably imagine I was very relieved that the boys in blue didn't let me down in my absence, putting those not-so-pesky-anymore birds to the sword in similar fashion to last season's encounter.

The only real wider talking point that can come out of a match like this is the vast difference between the professional rugby programs in Ireland and Wales. Across the water they seem to have at least equal if not better success overall at test level yet when it comes to provinces v regions, there can be no comparison. I honestly believe the Leinster A side that earned themselves home final in the Celtic Cup on Friday afternoon would have also beaten this Osprey selection, even with the likes of Dan Lydiate on the park.

All of this means that I get to do my favourite type of writeup where I simply describe the game's nine tries. My recuperating flu head is extremely grateful for that!

Back in a simpler time when we though the match would be a contest. Even when James Lowe stepped in touch after trying to run the length of the pitch after receiving the kickoff (of course he did), we pinched the ensuing lineout and proceeded to march up the pitch where we won an offside penalty in front which Ross Byrne dispatched.

It would be really cheeky to call the next few minutes a 'purple patch' for the visitors but an attacking scrum was eventually snuffed out by good ruck work by Doris before a dozen or so phases were thwarted by the blue wall and Michael Bent pried it free before it was hacked forward deep into Osprey territory. After retrieving it in the 22 a few phases tempted a penalty although it wasn't needed as Ross Byrne's perfectly measured kick pass to McFadden got us our opening try.

When a Luke Pearce kick was anything but contestable, we settled with a few phases at midfield before a linebreak thanks to a Dooley > Connors > Kelleher exchange was made look way too easy and the young hooker showed Cronin-like pace to take it himself all the way to the line.

It would be really cheeky to call the time up to this try a "barren spell" for Leinster but despite all the first half kickoffs going towards our end, we found it much easier to get into the opposition 22 and it was only our own mistakes that were halting us until the patience and perseverance paid off when quick hands from halfbacks JGP & Ross Byrne put Tomane over.

The Ospreys threatened a bit towards the end of the half but it was nothing the Leinster D couldn't handle, and when Keelan Giles kicked one out on the full giving us an attacking lineout, we got into their 22 thanks to Lowe chipping one up over the top and he had good support from Kelleher who was able to get it the rest of the way for his second and a guaranteed bonus point for Leinster.

With the Ospreys still going nowhere in our half, Doris powers through towards their 22 off a midfield scrum before we win a penalty which we put to touch. Kelleher finishes his hat trick in more conventional hooker style, getting on the end of the maul from the lineout to fall over the line.

Even from the bench you'd bet on Deegan finding his way on the score sheet in a match like this. After we won a penalty off an Osprey scrum in their 22, the back rower, my tip for greatest things this season among all the emerging Leinster prospects, crashed over following the maul.

Now it's starting to look like the bench players are queuing up to score. An unfortunate injury to Ciaran Frawley has given Ross Byrne's little bro Harry an opportunity to show his talents at a higher level and when the ball came to him off a scrum in the Ospreys 22 he had no interest in the three team mates outside him and his faith in himself was well rewarded, although he'll have been disappointed to push a relatively easy conversion wide.

With Jack McGrath gone north, the rest of the Leinster "loosie" pecking order needs to step up and it was good to see Michael Milne rewarded on his second senior cap with a try to serve up the 'fifty burger'. A series of dominating phases led by an eager Leinster cap against a deflated Osprey D saw Milne pick and touch down under the posts.

I hope I don't appear too patronising when I say this was one of the more impressive tries of the night. They wer pinned back in their own 22 but while sub back row Gareth Evans seemed bereft of ideas when he retrieved it, he still managed to exit and offload to his sub scrum half Matthew Aubrey and after a neat kick up the line forced Hugo Keenan to bring it into touch, Aubrey was on the ball enough to take a quick throw to Morgan who had an easy run in as Leinster were nowhere near being in position. Only negative thing I could say about it is that I'm not sure how much consolation it would have given them on the journey home, especially when a later shoulder charge by Evans on McFadden meant he finished the match on the naughty step.

So that was it - many thanks for Leinster for making my forced television viewing a pleasure and hopefully I'll be rested and ready to go next Friday when Edinburgh come to town, and on the evidence of weeks 1 & 2 they're looking to be a much tougher proposition.

That just leaves me to point out yet again what an impressive conveyor belt of well-coached talent keeps trundling towards our senior squad. Long may it continue. JLP

Later this week on Harpin On Rugby...