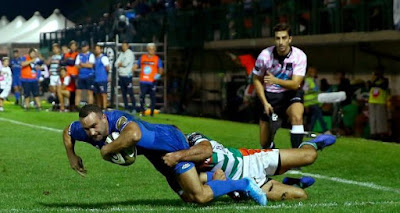 As much as I'd love to writeup this match in isolation, it's impossible to put it into context without mentioning the entire day that was in it.

There was of course an early start at Harpin Manor, with the Argentina v Tonga fixture getting me up at the crack of dawn to act as curtain raiser for that Match On Which I Shall Not Harp (at least not in this writeup; I did plenty of it in another one), and then I chose to let South Africa v Namibia pass as it was never going to be even close to a contest.

But despite the early triple header, I still had plenty of rugby to look forward to; two matches involving Leinster to be precise. First up were the A team who were continuing their Celtic Cup campaign and there certainly was no shortage of quality in a comprehensive 55-17 victory over their Dragons counterparts.

Then I was to leave Energia Park and head to a local drinking establishment to take the blogger's hat off for a couple of hours and watch Leinster kick off their Pro 14 campaign against Benetton over a pint of J Arthur's finest or two. My original plan was to stay in Donnybrook but since the afternoon match finished early I took a stroll to Ballsbridge where I was surprised to see my first port of call didn't even carry the channel that was showing the match!

I won't 'name and shame' them, but let's just say as I left I told the barman "of all places I thought I'd get to watch Leinster here" and he was genuinely apologetic. So instead I settled in The Bridge where I sat at the bar and thoroughly enjoyed taking in the 80 minutes while resisting the urge to check Twitter opinion or offer my own.

By full time, I was a happy enough camper. I was aided in my quest to forget the morning's result by both the bonus point win, and the bonus pint with which I rewarded myself before shuffling off into the rainy Dublin evening.

On my journey home I remembered a day back in 2011 that went the opposite way. Early in the morning it was Ireland winning their early World Cup clash before Leinster got upset at home to a (then perennial cellar-dwelling) Glasgow Warriors at the RDS. No question that was a much better day all things considered.

But one consolation for the arduous task of writing up Ireland's fall on Monday was that I still had this match at the Stadio di Monigo to review, and knowing the result as I did, there was no way I was going to come out of the sober re-watch with anything but a net positive viewpoint.

Yes, Leinster made several mistakes on the day. Yes, there was a case to be made for the sending off being fortunate for us. But the fact that we managed to come out on top despite falling behind twice can't be ignored. It was a good five points on the road at a venue that few will fancy visiting for the rest of the season, ourselves included because we go back in January (and by then we will also have hosted them back at the RDS).

So to keep to the theme in my title, I have eventually gotten to actually writing up the match under review. Leinster started brightly, and with Ross Byrne at 10 and Adam Byrne and Dave Kearney on the wings, there was only ever going to be one tactic of choice.

All three of them can consider themselves unlucky not to be in Japan for various reasons, and in case fans from other provinces start queuing up to attack me, I know that just doesn't just apply to the boys in blue. Their ability to connect with the high ball was put on display, though it had varying results in the first half.

For Adam Byrne's part he tends to do well tracking down high balls and he showed that in the opening stages, although his try, Leinster's first, was more conventional as he got on the end of a backline move after good front foot ball in the 22. That had us 10-0 up and reasonably comfortable.

As for Kearney The Younger, he tends to do better with a crossfield kick, although his attempts in the first half weren't going so well. Having dropped a relatively easy one, he then spilled a catch from a Benetton kick that gave our hosts the opportunity to make the most of some broken play before their prop Appiah went over, with Baravalle adding a second not long after to put them in front 14-10.

But for me the Leinster victory was down to players going on to atone for earlier mistakes, and with the first half clock winding down, Dave kicked one over the top to himself and made the most of the kindly bounce to get it over the line meaning we hit the dressing rooms back in front.

Another who had some first half boo-boos was Jamison Gibson-Park, one of the players I singled out as being crucial when it came to providing leadership during the World Cup phase of Pro 14 action. After 11m he was unable to execute a quick tap in their 22 thus wasting a good attacking opportunity, plus at other times his box kicks went straight into touch.

But despite Ian Keatley kicking Benetton back to parity shortly after the break, it was Gibson-Park who showed what he does best to help us get back in front when he sent a missile of a pass from the base of a ruck close to the line to find Kearney to earn his second.

Now it's time to examine the incident that came between the two scores I outline above, and the 49th min red card for Ratuva Tavuyara definitely played a major factor in the result. I have mixed views about it, as I can see two angles from which to approach it.

Just in case you missed it, after a Keatley drop out, Dave Kearney jumped to catch it only to be met by the Benetton winger (who hadn't jumped), thus putting referee Ben Whitehouse in the hot seat.

Instinctively I think red was a correct decision - of course I WOULD say that being a Leinster fan, but I don't actually mean it like that. I'm trying to go by the protocols which I understand to exist right now, and the ref did a decent job of spelling them out when he informed the Benetton players of his decision.

However, having seen similar incidents recently both in World Cup warmups and the tournament itself, it seems that referees tend to be going out of their way to find mitigating circumstances in which to avoid sending off a player if at all possible, and I can definitely see some in this collision.

If anything I reckon it's Ross Molony's involvement that plays the biggest part in the final collision. He clearly looks at Tavuyara before he gets to Kearney, and moves in his path. You could definitely say his intervention is what prevents a clean contest for the ball (or to put it another way, it was why he only 'got there eventually'), and with a different ref the sanction could even have been against the Leinster skipper.

Yet down to 14 men the Italians went, and when Dave's try put us back in front, it looked like we should be able to bring our lead home, but the sense of apparent injustice seemed to spur on the home side and they hit us with everything they had to get the lead back thanks to a Sparandio try after an excellent combination with Riera.

To be fair to Leo's charges on the day, it would have been very easy for them the lose their composure from that point on, even with the extra man. And in the final quarter it wasn't even our bench we were leaning heavily on, rather players who did the full 80.

With 15m left, Kearney completed his hat-trick, doing well to beat his last challenger in the wide channel. Also Ross Byrne added another sweet conversion from the touchline to go with one from earlier on.

But that only had us two points in front, and apart from shipping a penalty which Ian Keatley was unable to put over, for the most part we defended very well in the final minutes, with Caelan Doris ripping one free at a breakdown before combining with Max Deegan later to force a choke tackle that put Benetton's hopes of a third comeback to rest for good.

Finally the task was left to Harry Byrne, taking his Leinster bow coming on for big bro, to add the late penalty that gave us a five-point winning margin. In many ways you could say this opening Pro14 outing for Leinster was similar to that from last season when we edged the Cardiff Blues to also earn a maximum point start away from home, though I reckon that was more fortunate than this one.

Suffice to say this particular Leinster fan was happy enough all round, and he's very much looking forward to the home opener on Friday when we welcome Conference A rivals the Ospreys. It will cap off a week of rugby that has to be the busiest seven-day stretch this fan site has ever seen, not that I'm complaining! JLP

Later this week on Harpin On Rugby...