Podcast Ep 12 : "Do we know weather or not this will be a good World Cup?" 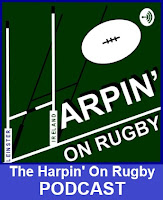 On this week's pod I have a moan about turnaround times, there are reviews of the final warmup of all of Ireland's Pool A opponents, plus a chat with my fellow panellist from the DTwo Bar last Friday, Cian O'Mulleoir.

"WELSH ON A BET"
"UNION? REALLY?"
"ALWAYS TAKE THE WEATHER WITH YOU"

This week I look at three stories in this week's rugby news that the sport could do without.

No full interview this week but the next best thing - five different takes on Ireland's RWC2019 chances offered by my guests from previous weeks.

With no top flight rugby last weekend, after having a ramble on Ireland's Pool A Monday here on the site, I have a quick look over the other three pools in 80-word bursts.

LEINSTER'S A TEAM - A PLAN COMING TOGETHER

...including our Final Whistle quote which is from Irish legend Mike Gibson.


If you want to be part of a future pod, you can leave a voice message by following this link, or alternatively just get in touch by email at paganoblog@gmail.com
at September 18, 2019