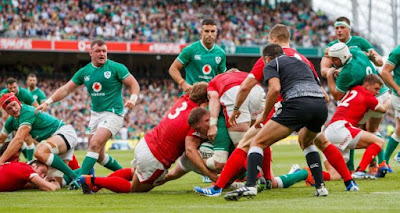 Before I get into the match itself, I’d like to get this pesky topic of the world rankings out of the way, simply because so many in the ruggersphere seem to view it as some kind of elephant in the room even though all I see is a lazy cat curled up asleep in the corner.
In case the news somehow escaped you, the numerical jiggery-pokery that is the World Rugby ranking formula has decreed that Ireland is number one going into the 2019 World Cup. Of course I’m not surprised at all by the consternation coming from outside the four provinces, but although we’re known as a nation of begrudgers, the sheer volume of home-grown negativity surrounding this unavoidable fact has been astounding.
Two brief points about it is all that I will offer, though I could do many more. First, the notion that we should not be ranked number one because of the recent disappointment in Twickenham is absolutely absurd. Leinster went four matches without winning towards the end of last season’s Pro14, all against teams from the same conference, yet still finished ranked number one.
While the numbers used to rank the test nations are worked out differently, the principle remains the same. Ireland’s successful run in 2018 is still contained within our current ranking points total. Sure, two defeats to England plus one to Wales lost us some ground, but not only have the home-and-away wins over our Celtic cousins clawed some back, other teams have also had disappointments - England lost to Wales and drew with Scotland; the All Blacks drew with the Boks and lost to the Wallabies.
Second point...how can you call yourself an Irish fan and not see a number one ranking as a net positive? Of COURSE the true number one in the world is going to be decided in Japan; I really don’t see anyone saying otherwise. Yet the rankings are there, and although I’d be surprised if more than three people actually understood how the points work, nobody believes the numbers are being manipulated, do they? So it should be simple - We’re fans of a team > There’s a ranking > Our team is number one right now > We say “woo hoo!” and move on.
WOO HOO! Moving on…

Then there was Kilcoyne throwing himself into carries, tackles and clearouts like our World Cup hopes relied on each and every one, proving he’s just the man we’ll need when they do, if only from the bench once Healy is fit. Iain Henderson was another putting himself about and even when the Welsh managed to get the ball out wide, the cover was more than able to cope, each and every time.
As the clock ticked towards the hour mark after a massive shove from the scrum, we won a lineout in their 22 (this wasn’t ‘clean’ but the stats showed the two early darts we lost were the only ones out of 12) before embarking on 15 punishing phases around the line before James Ryan got it over. The TMO couldn’t confirm but Reynal was happy the ball was grounded and although Sexton couldn't get the conversion over, our lead was now nine and thus comfortable enough given how solid our D was.
The substitutions continued - Porter got some game time on the tight head side, Carty replaced Sexton at 64m and Luke McGrath came on for Murray at 72 (he and Kleyn did plenty to dispel my pre-match concerns). None of those changes made any difference to the comfort of our second half domination. The Welsh did have one brief impressive sequence when offloads and strong runs got them out of their own 22, yet only for Ringrose to swipe it out of Liam Williams’ arms at halfway.
Eventually a high tackle on Aki put us in another strong attacking situation and if I had to find an Irish disappointment on the day, it was that we weren’t able to convert that into points as we had all our previous chances. That said, Wales shipped about a thousand penalties in those closing stages while Reynal only realised he’d brought his cards with just a few minutes left so that helped them hold us out. Which brings our series offour "warmup" matches to an end. The only question is, how warm are we? Well if we had been just told ahead of time that we’d win three out of the four, we’d probably be happy enough.

Of course the nature and venue of the defeat made it a bit much to take, but since then we have had two decent wins against a team that has beaten England twice this year, with players getting game time, several combinations being tested, and as I’m putting the final touches to this writeup, reports are coming through that the 31 selected for the plane have all been passed fully fit to travel.
Another who was having his last outing at Lansdowne Road was Joe Schmidt. His first match was against Samoa, and of course we’re all hoping against hope our encounter with the same opposition on October 12 won’t be his last!!! But it was the third match against the All Blacks that set the tone. Despite the crushing ending, that was a performance which showed the true quality he was able to get out of a squad that went on to evolve during a six-year period that had way more ups than downs.
So there we have it. The debating can stop. The analysis can stop. Even the whinging can stop (not sure if every online commenter can manage that one though 😜). The next time we see the boys in green will be at kickoff time on Sunday, September 22 and whether we’re in the International Stadium Yokohama, at the pub having “brunch” or at home, it will be time for the supporting to start.

Maybe if we can try to think positively about our chances (whether or not looking at the rankings helps us do that) it will help US get warmed up for the fantastic 44-day feast of test rugby that lies ahead. JLP

PS - many thanks once more to Big Joe Shep, Keego and DTwo Bar & Night Club for hosting the World Cup preview last Friday. To those who were there on the night, let's just say my plan to jinx the Welsh seems to have worked! 😉

AUDIO VERSION OF THE ABOVE WRITEUP
Later this week on Harpin On Rugby...