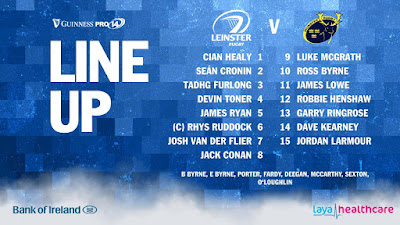 We have issues from Thomond at Christmas, they have them from their last few trips to Dublin.

We want to retain our title, they're hungry after a far-too-long wait for one.

Both of us recently got owned by Sarries (albeit in different ways) and see this as a perfect opportunity to atone at least in part.

The winner goes to a final, the loser goes on holidays.

Oh, and it's Leinster v Munster, which should be enough all on its own.  I mean I didn't really have to tee it up with all that lead-off blather, did I???

When I first saw the starting lineup my eyes jumped to number 10.   The absence of Sexton's name disappointed me greatly, which of course means no disrespect to Ross Byrne.  Then I looked at the rest of the XV and felt a lot better - very strong all round.

It took a while for my gaze to get to the bench to see who is wearing 22.  I honestly thought he'd have been left out altogether - which might not be great for those who bought tickets expecting to see the club captain on show, yet understandable given Joe Schmidt is just 240 minutes of hiding behind his sofa away from having all of his players under his control ahead of RWC2019.

So at least we are going to see Johnny take to the field at some point, and given that this promises to be a 'feisty' contest to say the least, it could well work to our advantage to introduce him later.

On the subject of discipline, I hope the appointment of Mike Adamson doesn't prove to be a major mistake.  From what I have seen from him this season, being assertive isn't exactly his strong suit, and that's exactly what will be needed here.

But this is where Leinster need to focus more than anything.  There could well be early chaos caused by contentious lack of control, and if so it's essential that we're ready for it and manage to adapt.  I have often said about the way both Leinster and Ireland play rugby that although it can be a joy to watch when allowed to flow, when it isn't, the matches are still there to be won if we keep our heads in the game.

I'm delighted to see Dave Kearney get a start; I thought he was unfortunate last week after doing extremely well for us when called upon since Christmas.  On the opposite wing, James Lowe will surely be disappointed with his lack of involvement last week (not to mention his early exit in December) and should be looking to get his name back in the headlines the good way.

When it comes to the pack, what an amazing sight it is to see Josh van der Flier back on the team sheet.  This might not be the most ideal match for rehab as we need his breakdown wizardry from the kickoff, but he seems like the kind of player who can quickly get his intensity levels where they need to be.

As for Munster, well their squad definitely looks like one that can come to Dublin and get a result, and we all know they will lack neither passion nor fervent support from the sold out (with added capacity no less) RDS crowd.  As often is the case when these two sides lock horns, they have plenty in their ranks who would like nothing better than show us we made a mistake letting them go.

But their key has to be Carbery.  For him this has to be the best competitive pre-World Cup trial left so it's every bit the right amount of pressure.  Naturally it will be up to us to limit his opportunities because he can be devastating when given them.

Going back to the bench, there's no way Sexton is the only threat we have in reserve.  In what should be a phenomenal contest around the breakdown it will definitely help our cause in the latter stages to be able to introduce the likes of Porter, Fardy and Deegan to the action.

The bookies have us winning by 7 but I've seen enough of these matches over the years to know not to be too comforted by that.  I think we'll just about end up on top but much like last year it should finish close I'll say 2-4 points in our favour with plenty to harp on afterwards.

So hopefully I'll see you there and let's make it another rousing atmosphere to match the occasion!!! JLP

PS - best wishes to the Ulstermen tonight - they don't have an easy task but they certainly have what it takes to make it an all-Irish final!