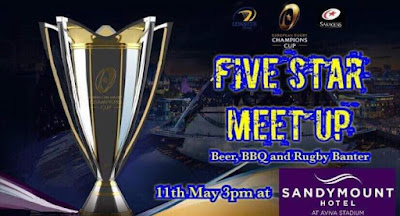 Ruddock will return to the squad and the Ireland international is expected to be used off the bench on Saturday.

Alex Goode - one of Europe's best but not wanted by England

Chris Jones - BBC Rugby
Munster’s attempts to assemble a coaching ticket...will get underway in line with that famous Chinese proverb that even a journey of a thousand miles begins with a first step.

Fox Sports Australia
Everyone has to be a ball player and when you get 15 guys that like carrying and like getting on the ball, it makes your attack much more dangerous."

Note - views expressed in "Front Five" links do not necessarily reflect those of HarpinOnRugby
at May 09, 2019