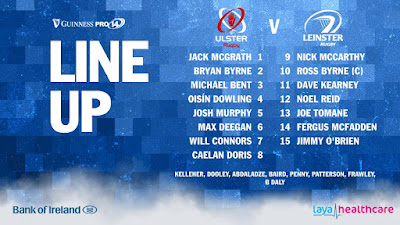 Before I get to my thoughts on this particular match, I'd like to share a teeny tiny qualm I have with the Pro 14 format.

Overall I think it has been very good for the league, easily putting to shame all the doubts and criticisms put out there by fellow keyboard warriors before a ball was even kicked.

But I do think this practice of having an ‘all-derby’ round as the 21st and final one is a bad idea.  For one thing, with three playoff places up for grabs in each conference and 1st place earning a guaranteed home semifinal, it might be better to have the derbies in earlier rounds when there wouldn't be as much riding on the results.

However I fear there could be an even bigger disadvantage.  While both teams in Conference B's top two are guaranteed to finish Saturday's match where they started on the table, there is a three-way scrap for the third and final playoff spot.

Currently in pole position are Benetton, and what an achievement it would be for an Italian side to earn itself some top level knockout rugby.  But as much as I'd like to see this happen, were they to earn maximum points in their last match of the regular season, thus guaranteeing them 3rd place, is it crazy to raise an eyebrow given their opposition are Zebre?

Of course I'm not saying Michael Bradley's side would be ‘told’ to ‘throw’ a match, but that said, having a team in the knockouts would be a great benefit to Italian rugby in general, so if either Edinburgh or the Scarlets were my team, I'd have to wonder if the Treviso club appeared to get their points too easily.  And that's a temptation that could befall any club from any nation in the competition, in case you think I'm just targeting the Italians.

But I suppose that's just a ‘hot take’ on my part - it's about time I began harping on Saturday's match.

With nothing but pride to play for plus much bigger matches coming down the line (sooner for Ulster who host Connacht next week), it's of little surprise to see so many ‘marquee names’ missing from the matchday 23s.

On Leinster's side of things, a few names stand out in the starting lineup on account of the players moving on - Noel Reid was revealed during the week to be headed for Leicester, Nick McCarthy is off to Munster, while Jack McGrath will be facing his future team mates.

For me the boys in blue who have most at stake in this match are on the wings.  But for a combination of bad timing on the injury front and the rise of quality talent out of the academy, both Dave Kearney and Fergus McFadden could well be high up Joe Schmidt's pecking order with a World Cup on the horizon.  With games fast running out in Leinster's season, they will surely be extra keen to make their mark.

Then at 13 once more we have Joe Tomane, who despite being on the losing side against Glasgow a couple of weeks ago, put in a decent shift in the outside centre role and another one could put him in the frame for some action in May.

In the pack we've a very interesting looking back row that could well be the future for Leinster.  Max Deegan is more than ready for the ‘elite’ level in my humble opinion, while both Will Connors and Caelan Doris shouldn't be too far behind him in terms of regular game time.

I haven't done the research for my next claim but I reckon that in Oisin Dowling and Josh Murphy we could have the most inexperienced lock pairing ever to start for Leinster?  Add in the uncapped Ryan Baird on the bench and it will certainly make the lineout an area where the Ulstermen will feel they can exploit, with the likes of Nagle and O’Connor in their lineup.

Ross Byrne gets the captain's duties on Saturday and the honour is well deserved - he has played a large part in our success in recent years and reaching his level of consistency can't have been easy given he was thrown in the deep end.

As for Ulster while they also have other matches on their minds, the roars of ‘Stand Up…. ‘ throughout will be extra strong throughout the match as I reckon there's never a bad time for them to put one over the Leinster lads.

The bookies have us winning by 4 points.  I honestly think this could go either way but while I rarely predict my team to be on the wrong end of a result, I may just do so here, mostly because of the abundance of untried combinations throughout the lineup.  I'll go with Ulster by 4.

Whatever happens I hope there's a decent turnout on the day - sadly I can't make it up the M1 myself but I know many who can.

Speaking of making it, if you're not bound for Newcastle for the Heineken Final on May 11th hopefully you'll be able to join me and a host of Leinster nuts at the Sandymount Hotel to watch the match.  Should be an awesome day with hopefully an awesome result - check here for the Facebook event page thingy with all the details. JLP