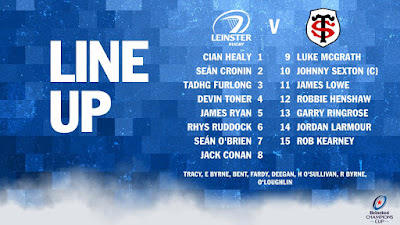 The fact that both of these great clubs have won four European titles does make this match a potential classic all on its own, but then again that's relying a bit too much on history to guarantee entertainment.

In order to look ahead to what's in store we need to focus on the two matchday 23s, and when we do that, well, nothing really changes - if anything it makes the eager anticipation even stronger.

Leinster are virtually at full strength in the starting XV - perhaps Dan Leavy or Josh van der Flier would have a shot at the 7 jersey if fit, but former European Player of the Year Sean O’Brien isn't a bad option either and he's had a decent amount of game time in recent weeks to get him up to speed.

But the position that catches my eye most of all is scrum half.  Luke McGrath is also a welcome returnee from injury, but when I saw the names Lowe and Fardy also in the 23, my eyes quickly darted to the number 21.

Gibson Park had a decent outing against Glasgow last week but a late injury meant Hugh O’Sullivan, who struggled a bit when he took to the field in the same match, is named to the sub's bench, which all due respect to him, probably means that Luke will be expected to be involved for the duration on Sunday.

He certainly won't have much objection to seeing Johnny Sexton outside him; what a perfect time for him to recover.  If the weather behaves as is forecast, he'll have a perfect opportunity to execute his game plan and if he gets it going early we'll be tough to beat.

Then we turn to the Toulouse lineup, and at out half they have named Antoine Dupont, himself usually a very pesky 9 though French sides are well known for having scrum halves that are more “9.5” (although Irish rugby has seen a lot of it in recent seasons with the likes of Murray, Pienaar and Cooney).

It will be very interesting how the ST backs operate tomorrow with Dupont and Bezy darting this way and that, especially when you consider of the sheer quality that is behind them in Kolbe, Huget, Guitoune and Ramos, and a certain Monsieur Médard ready to spring from the bench.

To keep them out we'll need our defence to be top notch, and as always much will depend on the tracking ability of our centres, so it's great to have our best ‘Henrose’ partnership together once more - the first phase play on Toulouse possessions is going to be some battle for sure.

When it comes to the forwards, our pack is full to the brim with carrying power, of that there is no doubt.  After watching his knee strapped towards the end of the match last weekend it's great to see Tadhg Furlong able to start, so that only leaves one area of concern for me as far as the forwards go, lineouts.

Once we get the transfer of dart from hooker to lifter right, the set piece can reap wonderful rewards for us every time, but that step has been unreliable for quite a while now and you can be sure our Top 14 visitors will be well aware of this.  Hopefully Devin Toner's presence will help steady the ship.

Then there's James Lowe. JGP's misfortune is the Kiwi's opportunity and he could possess just the right amount of x-factor we'll need to convert red zone chances into points.  And if he can get involved early and draw defensive attention, there's another ‘JL’ on the opposite week who has also been known to have some YouTube moments.

When these same two sides met at the RDS in January I think Toulouse tried too hard to stray from their normal game and paid the price. This time they may try something different again but surely when you're in first place in the Top 14 you should trust the rugby that got you there, whatever the opposition.

I'm not as deterred by Wayne Barnes being the ref as many seem to be - here's hoping he doesn't prove me wrong but having said that, a match that promises to be as tight as this one does could be heavily influenced by a controversial decision or two.

All of the above suggests a real ‘ding dong’ battle. The bookies have us winning by 7.  I'm thinking it's going to be even closer than that but even with our recent Pro 14 results being disappointing I have to back the boys in blue to make the most of home advantage and I see us prevailing by 4 to 6 points.

So like I normally say in this portion of my previews for home matches, we Leinster fans have to make sure we're covered in blue and bring our loudest screaming voices to get behind the lads.  I hope to see you there, here's to an awesome day of Easter Egg-chasing and fingers crossed an all-Irish final in Newcastle!!! JLP