Naoupu wins Leinster Player of the Year by Ciarán Duffy

Amongst all the prizes given out at the Leinster Awards night on Sunday, one that shouldn’t be lost is the one that was given to the Leinster womens captain.  Sene Naoupu was awarded the Energia Women’s Rugby Award. 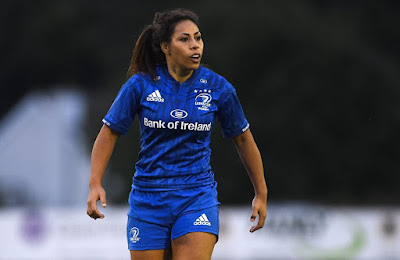 Leinster Women won all three of their games in the inter-pro series at the start of the season.  It’s a shame they only play three games at provincial level.  It’d be great if they could fit more in to coincide with the club game.  It would really at to it if the provinces played each other home and away, or if there was some sort of competition between Welsh and Scottish sides, or possibly Italian too.  A European Cup might be a bit of a way of at the moment, but it should be strived for ultimately.

Sene has been a sensation for Ireland since making her competitive debut since 2016.  She’s been an ever-present in the squad since then, and seems to never have a bad game.  She’s shown her fitness levels, having featured in every game at the 2017 World Cup.  It’s been a difficult few years for the Womens National side, but the players have carried themselves well in building towards the next World Cup, and Naoupu is a key leader in the side.  In these difficult transitional times for the womens side we should recognize the great talent that is there.

There was tough competition in the squad for the award, there were Ireland internationals like Aoife McDermott, and Lindsey Peat in the squad to name a few.

My personal favourite memory of seeing her play was last November at an international against the USA.  I told my brother to look out for number 13 green, just as he pointed out to say “that player there” Sene gave a USA defender an almighty clattering into next week.  My point was made for me and I didn’t have to explain any further.

If you haven’t heard it you should read up on her story of overcoming mental health problems on her way to becoming an Ireland international, it’s truly inspiring.

Ciarán Duffy (@Voicenstein) is a Leinster supporter and self-proclaimed ‘big cheese’ of Post To Post (@PostToPostSport).   He’ll write about anything rugby under the condition he gets to take it too seriously.
*****
Want to see your own rugby opinions on the web?
Click "Write for us" in the sidebar to find out how.
at April 29, 2019