Portugal scored 7 tries to Lithuanias 1 in their final Rugby Europe Trophy game before their relegation/promotion play-off with Germany, the date of which is still to be decided. Lithuania have games against Switzerland and Netherlands remaining, however they are already save from relegation with Czech Republic finishing last.

In the clash between sides yet to pick up any points in this years competition, it was Cyprus who edged out a victory. The result see’s Cyprus survive with Bosnia & Herzegovina relegated to Conference 2 for next season. This week Malta and Croatia face off to determine who gets the place in the promotion play-off.

This is possibly the most obscure game I’ve ever commented on from an Irish point of view. I never saw myself getting #AsiaRugbyChampionshipDivision3West trending on Twitter.

Qatar took the lead through a Bakaddouri penalty, converted by Tremayne. Before tries from Finan and Ferris put Lebanon 7 – 10 in front. It stayed that way at the break, both sides were forced into first half substitutions.

The second half was tight, with just two penalties from Tremayne o the 66th and 76th minute giving Qatar the win, despite going down to 10 men between penalties with Allen being sinbinned with the scores level.

This result makes Qatar Asia Rugby Championship Division 3 Champions (try getting that on a shirt in large font). Qatar beat Jordan in their first game 77 – 0, while Lebanon beat Jordan 6 – 71 midweek.

Another possible contender for the ‘most obscure from an Irish point of view’ shield. The teams were fighting for 2nd place with Martinique already toping the group, having beat both Barbados and Curacao 43 – 19 and 39 – 0 respectively. 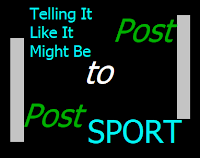 Ciarán Duffy (@Voicenstein) is a Leinster supporter and self-proclaimed ‘big cheese’ of Post To Post (@PostToPostSport).   He’ll write about anything rugby under the condition he gets to take it too seriously.
*****
Want to see your own rugby opinions on the web?
Click "Write for us" in the sidebar to find out how.
at April 11, 2019