Six Nations Team of Round 4 by Mark Jackson 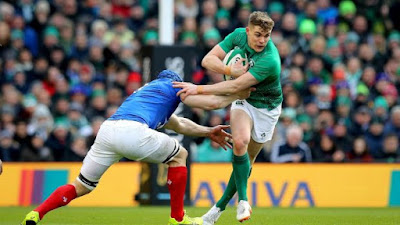 15. Jordan Larmour (IRE) Still more to come, but improvement on recent outings in green. Covered well in defence, and dangerous with ball in hand , needs to improve end results.

14. Joe Cokanasiga (ENG) Lets not compare him to anyone just yet but a MOTM performance from the Bath wing was deserved despite not crossing the whitewash. Offloading game and power a joy to behold.

13. Garry Ringrose (IRE) Ireland simply not the same side either in attack or defence without the Leinster man. His importance cannot be understated , both Welsh centres had fine games without setting world alight.

12. Manu Tuilagi (ENG) Getting back to his best , powerful carries with some neat stepping too.

11. Josh Adams (WAL) Having a great 6 nations scoring for fun and becoming one of the first names on Mr.Gatland's teamsheet.

10. Jonathan Sexton (IRE) Still a bit short of his 2018 form but a controlled and much more accurate outing.

9. Ally Price (SCO) A position where no one really excelled this past weekend , Price's pace added an extra bite to a previous blunt Scottish attack.

8. CJ Stander (IRE) Highly effective game from the Munster man . High tackle count made hard yards and some recovery from facial fractures. His go forward for Ireland's plans this season are vital.

7. Hamish Watson (SCO) Came on and made a big impact on Saturday , linked well in attack and worked hard on the floor too.

6. Josh Navidi (WAL) Goes about his work quietly but no less effectively. Massive workrate and always a nuisance at the breakdown. Brad Shields enjoyed his best outing so far for England.

5. James Ryan (IRE) So good he feels the need to tackle on his knees these days..

4. Alun Wyn Jones (WAL) Just edges George Kruis for the other 2nd row berth , his leadership and influence is seen in this Welsh team when under pressure , which they were for long periods.

2. Rory Best (IRE) A fine finish to his career at the Aviva just edges Jamie George.

1. Cian Healy (IRE) Another influential game from Ireland's loosehead , his increased mobility allowing more carries and greater impact at the breakdown too , unlucky not to sneak a cheeky try.