Six Nations Week 2 team of the week by Mark Jackson 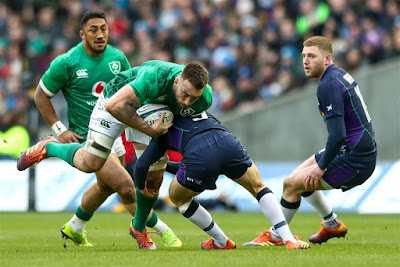 An inviting and exciting opening half in Edinburgh was a bit of a falsehood as to what was to follow for the rest of the weekend's fare in Rome and South West London. Here is this week's selection from Round 2 of the 6 Nations Games.

15. Elliot Daly (ENG) His left boot once again pushed France into places they didnt want to be , more to come too one expects. Rob Kearney ran well in Murrayfield too and is unlucky to miss out.

14. Jonny May (ENG) Another example of supreme workrate running off the ball and kick chase. No substitute for raw speed.

12. Sam Johnson (SCO) The pick of the Scottish backs , one not prone to as many basic errors as his teammates. A try capped off a fine effort.

11. Josh Adams (WAL) Jacob Stockdale stepped up again thankfully but Adams pips him to the 11 shirt with a fine game in Rome. Elusive , good footwork in traffic with acceleration to boot .

10. Owen Farrell (ENG) Almost a stroll in the park this past Sunday , making right decisions time and again and no high swinging tackles so far , the main man for England.

9. Ben Youngs (ENG) Not as conspicuous as in Dublin but gets the 9 jersey more so as none of his rivals were that good. Dupont had a good cameo and surely the future for Frande.

8. Jack Conan (IRE) Edges Billy Vunipola for the 8 jersey , a fine controlled display from Conan, got through an amount of work in the tackle and carrying.

7. Jamie Ritchie (SCO) Sean O'Brien was close to his best but Ritchie put in an all action display and was hard to shift at the breakdown , the Toms Curry and Youngs also showed well.

6. Braam Steyn (ITA) The back row in general was the hardest selection for me this week with lots putting their hands up. Wilson and Wainright can feel agrieved to miss out but the Italian Bok had a monster performance to keep his side in touch for most of the match.

5. James Ryan (IRE) Another tough game and is being targeted by plenty of double hits but he keeps on going. Huge tackle and carrying stats again , improving in the lineout. Vitally important even at his relative tender age to Ireland's current and future successes.

4. Courtney Lawes (ENG) A controlled performance from the Saints man. Some big hits kept the heavier French pack and Basteraud on their backs.

3. Kyle Sinckler (ENG) Still needs to curb his enthusiam at times but improved at the scrum and has a great carrying game where his footwork and handling are adding to his power.

2. Jamie George (ENG) No real standouts in the hooking role for me this weekend , even the great Guirardo seems short of his usual brilliance . The Saracen carries hard and his hitting his man out of touch and is a big unit in an improving scrum.

1. Cian Healy (IRE) Edges Mako Vunipola this week. His renaissance continues , is a nightmare to tackle and contributes in all facets of the game. Keeping Dave Kilcoyne on the bench is no mean feat considering the form and cameos from the Munsterman.

A more even spread of representation this week , still dominated by those in white. Sad to see the state of the French side at the moment.

Want to see your own rugby opinions on the web?
Click "Write for us" in the sidebar to find out how.
at February 12, 2019