Six Nations Team of Round 3 by Mark Jackson 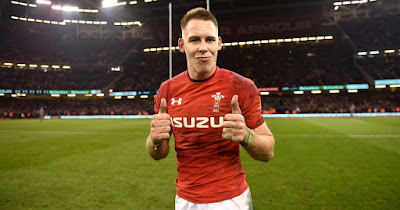 A French revival ? An overrated England ? Underrated Wales ? Improved Italy ? Scotland flattering to deceive , again ? And finally what's up closer to home ? Many questions still to be answered after round 3 of the 2019 6N , here is the pick of the past weekends performances.

14. Jayden Hayward (ITA) Not his usual position but had a fine individual game in Rome as part of a much more fluent Italian attack.

13. Jonathan Davies (WAL) Not as conspicuous in attack as in recent years but a supreme defensive showing from a class player. Basteraud had a good outing for France

12. Gael Fickou (FRA) For me one of his best all around games at this level , has always shown flashes of brilliance , wasted on the wing.

11. Josh Adams (WAL) Great finish for his try , high workrate in defence and always a threat ball in hand.

10. Romain Ntamack (FRA) Good thing he scored ignoring a three man overlap , France need to stick with him for progress , obvious flaws in his kicking game for a top class 10 but such an exciting talent. Tomasso Allen brought his backs into play excellently in Rome too

9. Antoine Dupont (FRA) Brings an energy to the French side , on form , dangerous breaker to add to his scrum half basics. Interests backrows leaving extra space for his outside backs and forward runners.

8. Louis Picamoles (FRA) Reborn this season after a few seasons full of doubt , lack of form and injury. Subtle footwork and offloads to go with obvious power , gets France go foward when they need it most.

7. Tom Curry (ENG) For the first 60 mins in Cardiff was the obvious MotM candidate , faded a touch in last 20 but another powerful outing.

6. Peter O'Mahony (IRE) The first Irish represensative in this weeks selection . Came up with vital turnovers on the floor and out of touch , just pips Navidi and Lauret to the 6 jersey.

5. Alun Wyn Jones (WAL) Supreme Leader Jones stamped his authority all over the Principality Stadium , Wales' totem and vital to their continued success.

4. Cory Hill (WAL) Came of age with an athletic and powerful outing and capped a fine game with an important game turing try. Needs to back this effort up.

3. Demba Bamba (FRA) His performances bely the callowness of youth , he isn't 21 till Paddy's Day. Soft hands and quick feet allied to his power at scrum and in contact zones make him a player to watch iut for , for years to come.

2. Guilhem Guirado (FRA) Back to somewhat near his best , looked forlorn in opening two fixtures , edges Ghiraldini who also impressed. Will be in Peter Horne's nightmares for a while.

1. Dave Kilcoyne (IRE) A tight decision for the loosehead role with a few contenders , the Munsterman's carrying and gainline successes see him capture the selection. Having a fine season overall.

1 Englishman , 1 Italian ,  2 Irishmen , 5 Welshmen and 6 Frenchmen are the make up of this weeks selection. A fallow week ahead sees time for returning injuries and no doubt some changes for each country heading into round 4.