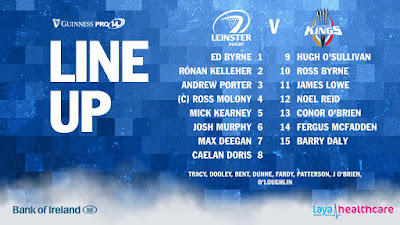 So this is the second week in a row, Leinster play a team bottom of its Pro 14 conference.  Last time, there were a lot of negatives for those who really wanted to find them, but still we managed to stretch our lead on the table to 22 points, putting us in a position where we can mathematically clinch top spot this weekend (though it's unlikely seeing how all of our five ‘rivals’ are also at home in this round).

This time our opposition are the Southern Kings (or to give their full corporate title 'Isuzu Southern Kings' which explains the 'ISK' in the match hashtag) from Port Elizabeth, who lost heavily in Cork last Friday although to be fair their performance at least seemed to be enough to avoid a whitewash.  The Munster men were just extra stingy on the night.

And before we write off our guests completely, let us a least acknowledge that despite their overall record they have definitely offered a few highlight moments to the league.  In the likes of Banda, Penxe and skipper Astle they have some skill, speed and muscle that can do damage if allowed.

But the fact remains that this fixture should be the most comfortable on Leinster's schedule and any resemblance in the progress of this match to that in Viadana last Saturday will not be received well by those in attendance at the RDS.

Making his debut at this level will be the next hooker off the Leinster assembly line, Rónan Kelleher, and of course we wish him all the best.  It's a very young pack overall with Mick Kearney the ‘aul fella’ among them although his fellow lock Ross Molony, our best player IMO last time out, has the captain's role so we should have enough in the form of leadership.

The next thing to catch the eye on the team sheet is Conor O’Brien's switch to 13 from 12.  With Noel Reid on the inside, it makes for a different style of backline so it will be interesting to see how Ross Byrne sets about getting the most out of them.  If they can successfully create situations for O’Brien to receive the ball in full flight with space ahead of him he could have a very fruitful night.

It's all change in our back three, but they're the kind of changes you never mind seeing.  Few clubs around Europe would have any problems starting with Messrs Lowe and McFadden on either wing, and in another switch of position, Barry Day moves over to full back.

On the Kings bench it's unusual to see both regular captain Astle and top playmaker Banda kept from the starting XV; maybe the thinking is that if we're out of sight in the final half hour they might sneak on and help them pinch a late try bonus? Actually for our sakes whatever the scoreline it should be worth sticking around to the end to see what they can bring, especially since we have a certain Scott Fardy in reserve ourselves.

Last week I challenged the boys in blue to beat the bookies' spread; but given its a whopping 38 points this time around (not to mention the way things went last time around) I can't bring myself to do it again.  I'll predict a margin in the mid-twenties, almost hoping that the Kings can put up something of a challenge, while still mindful that we'll need to keep things tight without the ball.

At the risk of heaping too much pressure on young shoulders, I reckon our starting 9 Hugh O’Sullivan's performance will be key to our getting close to the predicted rout.

Here's hoping there's a good turnout at the RDS - these are the matches which often end up with an attendance around the 10k mark, although there are a few teams in this league hat would be more than happy with that every week!  If you have a season ticket and can't go, don't forget it's really easy to pass it on to someone else; be sure and ask around. JLP