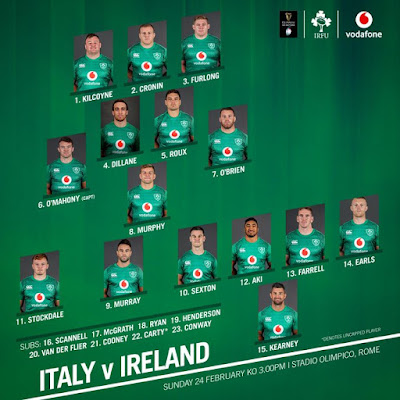 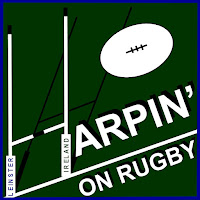 Nobody tell Conor O'Shea the bookies have Ireland to win by 30, ok?   Even as someone who would be more than happy with a result like that, I winced when I saw it.  That's not the kind of lack of confidence in your team that you want to see, especially when you'll be playing at home.

But I suppose the logic behind it is sound.  Even after you consider the gulf in standards between the two sides in general, you have the Murray/Sexton axis starting for Ireland in a match they might have sat out, while O'Shea's one superstar Sergio Parisse was ruled out by concussion he suffered playing for Stade last weekend.  It's hard to deny that absolutely nothing about this contest looks good for Italy's chances of causing an upset.

But before I tempt the anger of the rugby gods too much in this preview, I should point out that much stranger things have happened...

OK, superstitious nature satisfied, on to what will hopefully be a realistic preview.  I'll be very interested to see how our half backs approach this match.   This would have been an ideal chance to allow Carbery to start of course, but with him unavailable and only the untried-at-this-level Jack Carty with the squad, it made sense to stick with Sexton.

Much was said about how Joe and co weren't happy with the kicking game over the first two games, so it's possible they'll look to this as an opportunity to get it right.  Personally I'm wondering if this might be a chance to try other means just in case either the weather or opposition tactics force us into alternatives in the World Cup, but I'm sure they have allowed for that.

One player who wasn't ruled out by injury is Chris Farrell, and it is good to see some continuity across the back line for two matches in a row; this should definitely stand to us.

In the forwards however there are quite a few changes, some forced, others part of the overall plan.  Many believe that Sean Cronin should be our starting hooker - I'm not one of them since I reckon Rory's leadership role serves as a trump card - but on Saturday 'Nugget' will get a chance to shine from the start.  If we can force the Italians to ship penalties at midfield I can see him nabbing a try or two from mauls after lineouts.

Alongside him is Dave Kilcoyne who definitely deserves a start, and with Jack McGrath waiting in the wings, I fully expect the Munster loose head to put in a quality shift to show he belongs higher up the pecking order.

Taking the captain's armband is Peter O'Mahony - noone can doubt his commitment and undroppability and I'd much rather see a flanker in the role than an out half.

My only niggly worry is that referee Glen Jackson has been known to give the odd head-scratching decision (saw one or two just last weekend in Super Rugby) and should they go against us Peter will need to find the right balance as he sticks up for us.

We can't ignore the all-Connacht second row.  Both have shown they fully deserve this chance together and being team-mates certainly won't hurt.

On the Italian side, I'm wondering why O'Shea doesn't give Ian McKinley a starting role...surely he has nothing to lose at this stage?  The former Leinster man has done really well whenever I have seen him line out for Benetton this season, most recently last week as they overpowered the Scarlets to stay in playoff contention.  It can't be as simple as that the coach is concerned to be showing favouritism to a fellow countryman, can it?

I don't mean to disparage Tomasso Allan too much, it's just the Azurri have been searching for the answer at ten for years and I really don't think he is it.   One thing we can be sure of from their half-backs is some mischief from Tito Tebaldi though no doubt Messrs O'Mahony and O'Brien will keep it in check.

On the bench it's great to see Jack Carty being given the chance to get his first cap.  I'm assuming the plan is for the match to be over as a contest by the time he's introduced but his provincial form has shown he deserves this shot whatever the situation.

It's also good to see Iain Henderson available yet again.  I have to admit he looked a bit sluggish for Ulster last weekend so hopefully that's out of his system and having avoided a ban during the week he'll be looking to be back to his best in the closing stages.

Out of respect for the Italian coach I can't bring myself to concur with the bookies' prediction of a rout; it is definitely possible once the winds are with us (literally when it comes to Murray's box kicks!) but I'm going to be kind to our hosts and suggest they'll get a break or two themselves keeping our winning margin down in the low twenties.

When it comes to our chances of retaining our Six Nations title, that depends on what happens in Cardiff on Saturday.  But regardless we need to show that we can get back to performing at the levels of accuracy that have put us among the favourites for RWC2019.   One more good showing here will go a long way towards proving  that nightmare against England was but a blip.  JLP

PS Best of luck of course to the Women up against their Italian counterparts this weekend and congrats to the 'Wolfpuppies' for remaining unbeaten!