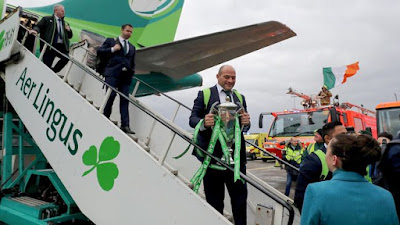 Aer Lingus, official airline of the IRFU, today announced that 15,840 seats will be available to eager rugby fans to help bring ‘Home Advantage’ to the Ireland team when they play away from home in 2019 Six Nations Championship.

Famous for their unwavering support of the Irish Rugby team, 6,600 loyal fans will have the opportunity to jet off to Rome to witness Ireland line out against Italy in Stade Olympico on Sunday 24 February as Aer Lingus has more than doubled the seat capacity (136%) on its Rome services for that weekend.

For the Wales game, the airline has added a one-off service from Dublin to Cardiff, operated by Stobart Air, offering up to twice daily flights and a total of 2,740 seats to help transport the Irish fans to show their support at Ireland’s final game of the championship.

Aer Lingus will also increase capacity on its Edinburgh routes by 30% to facilitate Ireland’s passionate rugby fans ahead of the Ireland V Scotland game on February 9th. Larger Airbus jet aircraft will service these routes to facilitate demand as Irish Rugby fans lend their support to the team throughout the Six Nations Championships.

Over 60 flights between Ireland and Edinburgh will take to the skies making over 6,500 seats available on routes from Dublin, Cork and Shannon to Scotland in total. An additional 1,500 seats have been added on the Dublin-Edinburgh route, and the Cork-Edinburgh route will operate up to three flights daily.

Commenting ahead of the 2019 Six Nations Championship, Dara McMahon, Aer Lingus Director of Marketing, said, “As the official airline partner of the IRFU, just like the fans, we too are gearing up for an exciting championship. We are proud to bring Home Advantage wherever we play and meet sporting fans’ demand across our route network with new routes and additional seat capacity. We look forward to welcoming the thousands of rugby fans on board Aer Lingus flights in 2019.”

Irish Rugby is flying high having been named Team of the Year while coach Joe Schmidt and Aer Lingus ambassador, Johnny Sexton both picked up individual honours at the World Rugby Awards. Through the highs and the lows Irish Rugby supporters have always been world class and will be looking forward to another successful year ahead.

Aer Lingus is the Smart Choice for Irish rugby supporters. For more information on fares and flight times, visit aerlingus.com.
at December 15, 2018