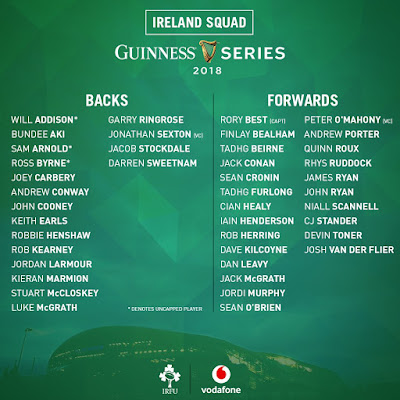 So nice of Joe to leave his squad-naming until Harpin Points Day, I'm sure that was his plan.

As always with such announcements the standout names are the new caps, and this time there are three, all of which are in the backs.

Ross Byrne should perhaps have a second asterisk, as he was on the bench to play the Wallabies in Sydney but never used...surely once he stays fit he'll come out of this series with at least an hour of test rugby under his belt.

As for the other two newbies, Sam Arnold and Will Addison...both have definitely earned their chance with their displays this season.  Arnold has a great attitude about him and Joe will no doubt be impressed with his workrate.   Not that the same doesn't apply to Addison...he has done very well in the opening weeks for Ulster and his move across the Irish Channel was a very brave one.  Hopefully both will get some game time, probably against the USA.

Next for scrutiny was the selection of scrums-half (I know that's not how you say that but I was recently corrected about 'Attorneys General' so I'm doing that with everything now) and with Conor Murray unavailable, while the trio to replace him of McGrath, Marmion and Cooney was very much expected, how they'll be used throughout November is anything but.

You'd think Luke would have the inside track what with being Sexton's provincial half back partner and all but Joe does like to use Marmion and  also Cooney has been pulling up trees in Belfast since his arrival so one can't be sure.  Maybe we'll see some kind of rostered arrangement similar to the way Joe selected Rory Best alternatives down in Australia.

In the forwards, it is of course awesome to see Sean O'Brien back in the mix though it will be interesting to see if there's room for him in the 23 even to face the All Blacks...pretty much every back rower to pull on the green shirt in his absence has done well and there's also Tadhg Beirne in the mix so it's going to be a real headache for Joe albeit the good kind.

Anyway....those are my initial thoughts on the squad apart from the locks who get featured in the next Harpin Point.

MY POSITION ON POSITIONS - 5

This has been a weekly series where I look at the 15 Irish test jerseys and harp on Ireland's options for each one, though I have done things a little different with the second rows because the numbers have appeared interchangeable despite the slight technical skills involved for each one.

So what I did was go over the three men I consider to be the top contenders last week in the fourth instalment...they were Devin Toner, James Ryan and Iain Henderson. This week I'll go over the options hoping to be lifted into the air and snatch those spots away from them.

As you can see above, Joe has opted for Tadhg Beirne and Quinn Roux to back up the top three, but that said, there's every possibility that Beirne could well be breaking through that ceiling. Since heading to Llanelli he has evolved into the kind of player you really can't afford to leave out of your matchday 23 and if he knuckles down and catches Joe's eye at Carton House he could get his chance, plus he is of course also not too bad in the back row either.

As for Quinn Roux, he didn't really impress much at Leinster but he did arrive here very young and he has definitely grown into himself while at Connacht. Word has it he is a very strong scrummager in particular, definitely a good string to have to your bow. I seem to recall discipline was an issue for him back in the day but he wouldn't make a Schmidt team unless that had been addressed.

When discussing locks it mustn't be forgotten that once in a while a back rower needs to be used as an emergency option and probably the best candidate for this role in the Irish squad would be Rhys Ruddock.

Elsewhere you have to feel for Ultan Dillane for being sidelined long term and also at Connacht another former Leinster man Gavin Thornbury has been doing well. Then there's Billy Holland and Kieran Treadwell who have gotten green game time before and would definitely do a job if called on but in the second row area it's starting to look as though the ladder could be pulled up sooner than in other positions.

And one of those other positions that is definitely up for debate is the back row...I'll start that task next week.

Once again a lot of Leinster fans' noses are out of joint as it is announced that yet another player is heading to another province, and it doesn't help that the destination is Munster either.

I understand how we really want to believe that our provinces are all independent clubs and if one is churning out talent at a much faster rate than the others, then the only consequence should be that everyone else needs to up their game in the academy department.

But that's just not how things work in Irish rugby. Although we watch the provinces week in week out while the test side only lines out about a dozen times throughout the season, we can't ignore which takes precedent.

Luke McGrath and Jamison Gibson-Park have received their share of criticism at different times but overall they'd take some shifting at the top of our pecking order and with the latter soon to qualify for Ireland, Nick McCarthy would've had to rely on injuries for first team chances. I'm not too sure what the plans at Munster are since I thought they had a few 9s for now anyway, but if there is clearly a need down there and he's willing to go, then the best of luck to him.

Plus having watched all the A team's home games during their victorious Celtic Cup campaign, it seems in Paddy Patterson and Hugh O'Sullivan we have a couple of decent options rolling down the assembly line.

Where I would have a quibble is with the timing. The season goes from September to May yet it's only October when we find out a certain player is leaving at the end? That just doesn't sit with me, though I suspect that agents receiving offers from foreign clubs behind the scenes might have something to do with it.

And remember...the province-to-province movement isn't always completely in one direction - we got a hell of a deal getting Robbie Henshaw, for example.
SIMON SAYS...SORRY

I can't believe I'm mentioning my 9-year-old's latest obsession Fortnite in this column for the second week in a row, but in case you're not up on the popular video game, its characters can do a variety of dance moves, the most popular of which is "The Floss" (which Tadhg Furlong performed very well at Leinster's Euro homecoming celebration last May) but also includes one you see below which I think is called "The Loser".

While I mostly enjoyed the round ball World Cup last summer (sorry if that damages my egg-chasing street cred but I'm just being honest), one moment I didn't like was right after Antoine Griezmann scored for France in the final, when he performed the above celebration.

The truth is that particularly in the highest level of any sport, there is absolutely no place for that kind of childish taunting.  Being a rugby fan I could have scoffed and made a very lazy point on social media like "you wouldn't see that in our game", but I know I wouldn't have been right.

Yes, I know he apologised and the matter has been more or less put to bed at this stage but this post goes out on Wednesdays so I decided to wait to add my few cents' worth.

In fairness, anyone who has played sport can appreciate that the temptation to do things like that can be very strong, especially when you and/or your team has done something awesome.  And in Simon's case the fact that his running line was taking him in the direction of the scantily-clad pre-match Parisians dancers in the corner of the La Defense Arena might have played a part as well 😜.

Seriously though, a line should be drawn between enthusiastic celebration and unnecessary and downright unsporting taunting, and Zebo definitely crossed it.  And to be fair, it was dealt with very well by Nigel and the players themselves.  Extra marks to Stuart McCloskey for sticking up for his young full back as well.

Was it an isolated incident for rugby?  Absolutely not.  I still haven't forgotten Martin Castogiovanni's tap on Stan Wright's head when the Leinster prop had just received yellow in the 2009 Heineken Cup final.

Then there's that frickin' frackin' Chris Ashton dive....I'd better wrap up this point before I say something I probably shouldn't.


Organisers might have hoped last Sunday's all-Pro14 Champions Cup meeting of Cardiff and Glasgow could be described as a "Who's Who of Welsh and Scottish rugby", but as it turned out, it was just a "Who's who?". 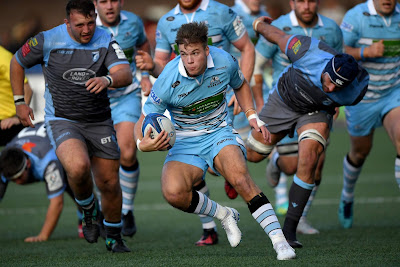 Seriously lads...I know the money kit manufacturers bring into the sport is important etc etc but at some point one of the blazers needs to step forward and say something like...

"eh, I'm awfully sorry chaps but aren't those two kits remarkably similar? You are aware that the game of rugby union does involve players piling on top of each other now and again and it makes things a tad easier for everyone if you can tell the two teams apart?"

I actually thought the same when Ulster wore red jerseys last week for the visit of Leicester but nobody else seemed to mind so I said nothing.  Sure, their traditional home white kit is also a colour on the Tiger's jersey but I think it would have been easier to tell them apart.

The point is...when these fixtures are decided, everybody knows who is making the various team's kits.  And in turn, those manufacturers know what designs they're going to have.  Somebody somewhere at the EPCR needs to set aside about half an hour to look at all the match ups and make sure something like this doesn't happen again.