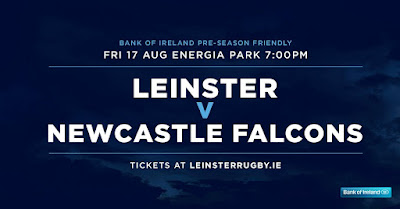 The Drive For Five starts now!!!!

I remember a time when that phrase meant Leinster were hoping to beat Munster for the fifth time in a row.  It was a time when we weren't even using stars on our jersey to show our Heineken Cup wins, though even if we were we'd only be entitled to one.

Yes, I know the boys in blue were in action last week, but the preseason only REALLY starts with this Donnybrook fixture as far as I'm concerned, and long may it continue.

Right...on to tonight's lineup.  Stand out name in the starting XV for Leinster has to be that of Joe Tomane...a fine addition to the ranks and I have no doubt he'll settle down quickly in an area where we can definitely use some experienced cover.

Then there's the back row...in this corresponding fixture last year we had a similar 'next generation' trio which was heavily involved in most things good for Leinster that night and as we know Max Deegan went on to do well for the senior team and Caelan Doris was one of the few highlights of Ireland's Under 20 World Championship campaign.  Standards are such that we should be expecting great things from Messrs Murphy, Connors & doris tonight.

Noel Reid raised a few eyebrows starting at 10 in Montauban last week and this time the honours go to Ciaran Frawley - he certainly looked the part for this level in his handful of appearances last season.  He'll definitely get a stern test tonight against a Falcons outfit coming off a fine season and with the experienced Toby Flood leading their line.

Speaking of leadership it's great to see Scott Fardy with the armband, though he certainly doesn't need it to show example to those around him.  Overall this lineup, if you'll forgive the well-worn cliche, has a 'great mix of youth and experience' and should provide the Donnybrook crowd with a perfect night to start the new campaign.

Just by way of reminder, Leinster have two teams' worth of matchday squads to fill for the month of September now, with the new Celtic Cup, the replacement for the British & Irish, set to start in a matter of weeks so there's a lot for the coaching ticket to ponder.

Of course I won't be doing any predictions with this preview, these matches could go any way what with all the chopping and changing and what-not.  What I will do is try to provide a 'liveblog' though the keys on my laptop packed it in and I've gotten the loan of a bluetooth keyboard for the night that is probably twice the length of the desk in the media box so that should be a challenge!!!

Whatever about that, it's great to be back harping on Leinster rugby again and I suppose I could live with a repeat of last season's success...no pressure lads!!!!  See you at 'old HQ' I hope.  JLP