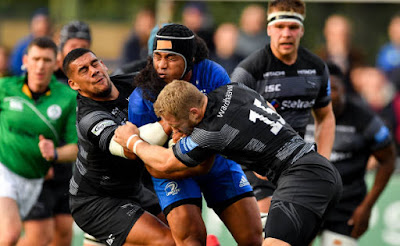 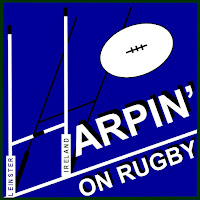 Leinster's amazing 2017/18 campaign certainly won't be remembered for the defeat at home to Treviso, nor for the thrashing in Galway on the final day of the regular season.  (Well at least it won't once bloggers like me stop bringing them up, but you probably see where I'm going with this.)

Of course this isn't a result we want to see as Leinster fans, but you're just going to have to believe me that even if the result was reversed I wouldn't be harping too much on it.  What we saw in Donnybrook on Friday was two different teams at different stages of preseason readiness and anyone who knows anything about rugby understands that the eighty minutes would have been very different had it taken place during the competitive season.

The Newcastle Falcons' social media guy was sitting beside me in the press box and he told me before kickoff to ask him about any names I wanted him to point out throughout the match.  Obviously I was very grateful for the offer, although the fact that I was doing a liveblog here on the site meant that I was always going to be more focused on the boys in blue.

However even if I had been looking for the names of the Falcons that stood out in their performance, it wouldn't have been easy because it was more about how the entire squad played together than anything else.  It was almost as though they were a club that before last season hadn't finished higher than 6th since winning the Premiership in 1998 and were now keen to show their 4th place in 2017/18 was no fluke.

Where do I begin?  Physicality, excellent.  Line speed, lightning quick.  Decision making, spot on.  But when it came to their passing & offloading, they were at higher levels again.  Sometimes it seemed their back three players began running their lines a few passes early yet still received the ball at precisely the right moment.  Other times the miss passes down the touchline were threaded through the smallest of gaps with military precision.

Apart from the sixth try which was an interception as Leinster were trying to force their way to a fourth of our own, all of Newcastle's five-pointers were the result of a calibre of rugby which suggests they plan to have a bigger influence on this season's Heineken Champions Cup than merely hosting the final.

When it came to our side of the equation, while it was clear that we had a 'weaker' side out and tend to be a few weeks behind Premiership outfits at this stage of August, what with the sky high standards set by last season it was disappointing to see any Leinster XV made to look so sluggish.  And clearly it was young Ciaran Frawley who had the worst night of it.

It was never going to be easy for him to square off against someone with the experience of Toby Flood, but we have gotten so used to watching players slot perfectly into senior level positions in recent years that Frawley looked destined for great things in Leinster's early season fixtures.

But from his first real opportunity it was clear this was not to be his night.  We had decent possession in the Falcons half and with their quick first up tackling the decision to switch the play and kick for the corner was a correct one but he had a little too much on it so it went out on the full.

Then moments later the visitors were crashing over for their first try and while I'd have to see it again to be absolutely sure, it seemed to be Frawley who missed the key tackle just before centre Tom Penny got it down.

Next he put the restart out over the dead ball line handing momentum back to the visitors and soon after he was slow to get up after an attempted (possibly a tad high as well) tackle at midfield and while he did stay on for a little while, he was eventually withdrawn.

While it wasn't a great showing, the biggest concern for Frawley will of course be his injury and hopefully it won't keep him out for too long so he can get back out there and show the kind of form that helped get Leinster A to last season's B&I Cup final.

So with Sexton, the Byrne brothers and even last week's surprise starting 10 Noel Reid all watching from the stands, it was left to Tom Daly to assume the outhalf mantle and although he went on to help himself to a brace of tries on the night, I still got the impression he'll be much more comfortable in a central role.

The first try actually levelled the scores at 7-7 and made it look like it would be something of a contest.  We got a rare chance to run at the Falcon backs with a bit of space and between them Tom, his namesake Barry and Joe Tomane combined for the sub to score.

Now is a good time to assess the performance of the new Leinster arrival.  For one thing, he and James Lowe are definitely going to be at odds throughout the season for 'best hair at the club'.  On a more serious note, while the timing was often a fraction off, you easily got a sense of what he will bring to our game.  Let's just say everything I said earlier about Newcastle's use of the ball will hopefully apply to us by the time the competitive rugby starts and Joe should be at the heart of much of it.

At scrum half, Jamison Gibson-Park seemed to try to take on a leadership role once Daly was outside him but when Luke McGrath came on for the second period you were left in no doubt as to who was the presumptive first choice 9.  Luke's first contribution was a box kick with a Conor Murray-esque hang time and whenever we managed to string moves together after the break his improvisation was involved.

It's probably about time I began harping on our forwards but before I do a word on Dave Kearney who looked lively enough at full back and will no doubt be aching to get a regular run in the first team to begin the season.

You couldn't say the forwards were being 'beat up' exactly by their opposite numbers, yet when you're even a fraction behind at this level it's clear to see and we found it difficult to string phases together.  Our scrum did manage to get a stranglehold in the second half but when we had a strong attacking position near their try line, it took referee George Clancy so long to stop resetting and finally show a card that a lot of time was wasted and we were never going to get the chance to claw back the lead that had been steadily built by the Falcons throughout.

Even with the space afforded by prop Mavinga's sinbinning, it took us a fair amount of phases to get Adam Byrne over the line for our second try, then not long afterwards a decent maul after a lineout got us well into their 22 before James Lowe put Tom Daly through.

That little spell got the decent-sized crowd into the game but the brief bubble was burst by the interception try and it would be hard to deny that final score reflected the eighty minutes we had just witnessed.

So overall not the most enjoyable evening in some ways, but there was definitely a lot of quality rugby on display and for this annual pilgrimage to 'old HQ' there are always positives for Leinster fans...the first big evening of a new campaign, seeing all the familiar faces of fellow fans around the ground, having a pint or two afterwards (though it will be strange when Kiely's is no longer Kiely's...) - pretty much everything about the occasion was as it should be but the numbers on the scoreboard.

Now we're faced with a curious two week spell before the big kickoff in Cardiff on August 31 (perhaps an A friendly could have been arranged next week to keep us going?  Though I have a feeling they don't always make these decisions with a mind to satisfying our hunger) and it will be very interesting to learn what matchday squad we'll be going with...there weren't a whole lot of clues in the selections so far, apart from perhaps Tomane at 12 and we can't even be certain of that.

But hey...Leinster rugby is back, and there's a whole lot to look forward to, even more so than usual in September what with the new-look Celtic Cup.  Can't wait!  JLP