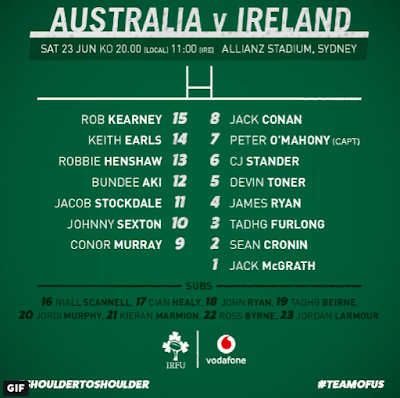 There are just eighty minutes left in the season for the 23 Irish players named above.  Most of them have already tasted Grand Slam glory, and many of them enjoyed a perfect season with their province into the bargain.  When that final whistle blows in Sydney, those facts will not change.

So I suppose the question that needs to be asked before this decisive third test for Joe Schmidt's men is...do they want to go into the summer break basking in what happened in the recent past or do they want to make a statement about how much further they can take things in the future?

Michael Cheika's Wallabies are going to do what they're going to do.  It's on their soil, and even without Will Genia they have loads of quality in their lineup, so they certainly won't be giving us anything easily.  But having watched the first and second tests multiple times, I can't help feeling that there is only one team that has a higher level of performance to reach and it's not the hosts.

On the one hand I was surprised to see Garry Ringrose left out of the lineup, especially given his foot injury wasn't so bad that he couldn't have been risked.  I also had initial reservations because I thought Bundee Aki didn't have the best time of it in the first test.

But then it became a lot clearer when I thought some more...Ringrose should hopefully get quite a bit of game time with Henshaw with Leinster next season so it's a good chance to give the Connacht centre a run and besides...he did so well in the Six Nations that it wouldn't really be fair to rule him out based on one outing.  Plus, Robbie himself knows he can play better than he has over the past two weeks so it's far from crazy to expect a strong outing from this pair and that's as good a starting point as any for a match like this.

As for the rest of the backline, well, it's the Grand Slam team, so nuff said, although I might add that Jacob Stockdale hasn't had an interception try on this tour yet so he's overdue...

In the pack there have been some interesting tweaks, most of which I'm happy with.  In my second test writeup I said that although Rob Herring and Niall Scannell have done well in this series, Sean Cronin deserves a start and I'm happy to see he's getting it here.  That said, there's a symmetry about "1st test - RH/SC, 2nd test - NS/RH, 3rd test SC/NS" that suggests the selections were somehow pre-ordained?

Elsewhere I'm wondering if we have missed a trick not giving Tadhg Beirne a start.  Fitting him into this XV would mean someone like Devin Toner or CJ Stander or Jack Conan missing out, but I think it would have been worth it in the long run as those three are established squad members and this would give Munster's new signing the chance to show he belongs though he should get more opportunities in November.

Most interesting part of the bench comes at numbers 22 and 23.  It would have been tough on Ross Byrne to bring him without selecting him, though with the series on the line, barring injury we have to assume the earlier he takes to the field for his first cap, the better we're doing.

Then there's Jordan Larmour...when we were marvelling over his wonder try at Thomond in December the debate was over whether or not he was too late for Joe's 2019 plans, now he seems to be the 'go to guy' for the 23 jumper.  I wonder if his future is in the back three however...there's a strong case to be made for him to develop at centre if possible as well.

But apart from offering best wishes to both Jack McGrath and skipper Peter O'Mahony for their 50th caps on Saturday, there's not too much more I want to say about individuals for this match because it's not about that, rather how they play together.  If we can replicate the kind of accuracy levels we showed in Melbourne, then we should be able to put points on the board, particularly if having a northern hemisphere ref makes a difference when it comes to using the yellow card after repeated penalties.

You can probably tell by my language that I'm confident of an Irish win.  Well, it's not so much of a confidence than an expectation performance-wise.  And with Joe, I'd say it's a demand.  All roads lead to RWC2019 and between now and the autumn this performance will be the biggest indicator of where we are.  Who's to say we won't be playing these same Wallabies in the semifinals so why not play like it is one?

Having given us a 1 point edge in the first test, then reducing that to zero for the second, the bookies now see us four points clear of our hosts.  I'll go with that as well for my prediction, but if we can really produce the goods it could be more.  Here's to the perfect way to both end an amazing season and begin what looks will be a sunny Saturday back home.  JLP