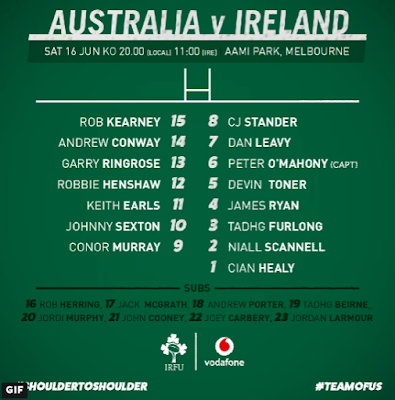 Could I have asked for a better Father's Day weekend?  Loads of test rugby on the Saturday, some roundy ball World Cup to fill in the gaps, and on Sunday, fair play to the Under 20s - I now see why they've ended up in the 11th place playoff - that was the only match kicking off at 10am our time so they didn't want to clash with any other sport that day!!! 😛
When it comes to the second test in Melbourne, even if I wasn't emotionally invested in one of the teams involved this would have to be hands down the top clash of the weekend in any sport...third in the world hosts second after doing extremely well to overturn us in Brisbane.  And this time, we're looking a lot more like our 'Grand Slam selves'.

But before we examine the expected names in our lineup, a word on those that were unexpected.  I have to say I was completely baffled by Sean Cronin's exclusion.  Was it REALLY all about that one scrum towards the end of the first test?

Now before anyone jumps down my throat saying 'what's wrong with Herring or Scannell', I'm not questioning this from a Leinster perspective.  Rory Best isn't there, everyone knows Cronin was next on the pecking order and frankly I hadn't seen enough to warrant his exclusion.

Anyway...on to more positive things, and it's great to see both Tadhg Beirne and John Cooney included.  Both had stellar campaigns last season which have been properly rewarded, and both are well poised to claim regular matchday 23 spots if they play their cards right - though actually starting would help this cause more and neither are guaranteed a chance on this tour.

In the backs, I'm hoping the 'Henrose' pairing will find their magic quickly.  Robbie didn't have his best outing last week though it's clear he's a determined guy so I'd expect he'll turn that around.  As I often say regarding centres these days, I'd be more concerned with their defence, especially with the kind of form shown by Kurtley Beale last week.  He definitely needs to be stopped.

Then at halfback we have the Murray/Sexton 'dream team' reunited.  Ironically Johnny took to the field with a lead last time out only for it to evaporate but few would blame it on him.  That's not to say he won't be extra keen to make his presence felt this time, however.  I expect us to be a lot more effective with the ball from the start and of course it will be crucial that if we get that edge we're able to turn it into points.

While the backs must be wary of Messrs Beale and Folau, our forwards of course can afford to ignore neither Pocock nor Hooper.  I'm really not so sure if we can afford to go too deep into sets of phases, no matter how confident we are.  It's going to be all about being smart with possession not strict adherence to a set playbook though to be fair, this was a feature we showed in this year's Six Nations.

In my writeup for the first test I spoke of the way we continuously laid down gauntlets for the Wallabies...well this time it's Michael Cheika's turn...he's only gone and named the same starting XV, 'why shouldnj't he?' you might say - true, but it's still quite the statement.  We have to assume he'll add another tactical string to their bow, though - because if the long passes and crossfield kicks work on us again we deserve everything we get.

Having given us the edge by the slimmest of margins last time out, the bookies can't separate the two teams at all this time around.  I'm counting on the boys in green to show better accuracy, be good at setpieces, and build an early lead which should be enough to bring home, though the Wallabies won't give up without a fight and it should end close, I'll say Ireland by 3-5 points to set up a grand finale in Sydney a week later.  JLP