Leinster's 2017/18 campaign - the writeup of all writeups (literally) 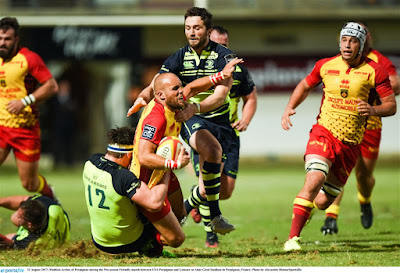 Both of Leinster's last two seasons ended against the Scarlets, albeit under slightly different circumstances.  So to give you a sense of what happened in between the RDS heartbreak in May 2017 and the completion of the #perfectseason last weekend, we've put together a timeline that we're calling 'the writeup of all writeups'.  It's pretty much self-explanatory so let's crack on...

It was a simpler time.  It's not like I thought a Grand Slam, Fourth Star and Fifth Celtic League title were impossible back then, but all three???  Not even on my radar, and I wasn't alone.  Anyway...we kicked off our season of harping with a post looking at Leinster's wider squad and trying to put together an 'ideal matchday 23' based on my perception of the form of the players available.  As you can see, I owe a few players an apology for leaving them out, Rob Kearney in particular...

After a couple of weeks in the gym, the first Leinster XV of the preseason took to the field at the Stade Aimé Giral.  Since we only got to watch via a Leinster fan holding up their phone using Periscope, we decided against doing a full writeup (so I'll link to the official Leinster site), but despite the defeat it seemed to be a good run out for the young selection.

PS - point of interest...while James Ryan was involved in Leinster's preseason, as you can see below, he wasn't used against USAP so even that stands to his winning record!

"...once again this practice of playing one of Leinster's preseason fixtures in a club ground was a success, as Friday's crowd seemed every bit as large and enthusiastic as that which went to Navan RFC around this time last year."

"...even when the play was over the far side of the pitch and I needed my trusty binoculars all I could see at every breakdown were blue jerseys adorned with 6, 7 or 8 heavily involved in all that was positive for Leinster."

writeup - 'STOCKED TO THE MAX'

"Isa was everything Leinster needed at each moment he was involved.  Crash ball? Grubber past rushing D into their 22? Neat offload? Force a turnover?  Clear out?  Key scrambling tackle? Those are only some of the boxes he ticked on the day. "

"Pick a matchday 23 for the province and any team in Europe would be more than happy selecting a 6, 7 and 8 from the players you left out.  It gets to a point where you almost forget to focus on the individuals themselves, yet Conan's display on Friday certainly got your attention."

"after three rounds we are the only team with 15 points out of 15, we have the second-highest amount of points scored...and we have the best defence.  I'm not using those stats to say we're perfect by any means, but let's just say my starting point has to be with the positives."

"you only need look at the Cheetahs' opening try from William Small-Smith to see how important it is to have an airtight 12/13 channel.  I had hoped Isa starting at 12 would give us that bit of experience and leadership we needed to keep it so, yet...he was forced to leave the field as early as the 17th minute"

"In my preview I highlighted our soft centre for the umpteenth time.  Both Noel Reid and Rory O'Loughlin did some good things in this match but each time they did, it seemed to get cancelled out by something potentially costly moments before or after."

Guinness Pro14 Conference B at the end of September

"The opening six weeks of the new-look league have gone pretty much as expected...much entertainment with much confusion thrown in as well.  But now it's time to step up a gear..."

"Even if time can't help lighten the load of our injury list, the coaching staff have shown they can make really good use of the resources at hand.  It's a pool that's tough for sure, but not just for us by a long shot."


"The pundits were obsessed with the fact that as a team we missed 34 (tackles) against Montpellier's monsters last week, and referred to it every time we missed one this time around.  Yet despite this apparent failing, we somehow managed another bonus point try win, ironically posting 34 points in the process."

"It's not much good calling for the ball if you don't have a plan to do something with it, and it seems that Seanie knew exactly how to exploit the numbers matchup that faced him in the wide channel.  Cool as you like he sets off letting go a pass to Adam Byrne in support at just the right moment"


Guinness Pro14 Conference B at the end of October

Rugby Champions Cup Pool 3 at the end of October

"I'd be more concerned about whether or not we have the versatility in our game to match [or at least counter] the open type of rugby that brought success for Glasgow, Connacht and Scarlets in recent seasons, particularly if our squad goes into the playoffs on the back of tough European and Six Nations campaigns."

writeup : "MARKS OUT OF TEN"


"From the restart we set up a maul which had us instantly on the front foot...then a pass to Jordan Larmour was a bit high yet he made it work before skipping past flailing tacklers and offloading to a steamrolling Sean Cronin.  Enter Ross Byrne again who plants a perfect kick pass over to the far touchline for McFadden to recover and he has Deegan in support to provide the finish.  An outstanding team try..."

Guinness Pro14 Conference B at the end of November

"There's something about his body language that just exudes confidence - 'I have the ball now and I'm going to make something happen' - and once the early cobwebs were brushed off he was able to back up that swagger to play a large part in his new team bagging a very handy five league points."

"Our first European success was largely thanks to the addition to our ranks of another Australian known for wearing six on his back, and while Fardy is a different kind of player, his importance both on and off the pitch for us cannot be overstated.  Having the confidence to trudge through 30- and 40-plus sets of phases needs leadership and he has it to burn. "

"We badly needed to make the right changes during the break.  Something had to be done differently because the English champions had our number.  And what the Cullen/Lamcaster brains trust pulled out the bag was not only just what we needed to take control of the match, it was once again very similar to what our opposition had been doing to us."

"Leinster have had a couple of stumbles this season it's true, but you can't amass an overall record of 13 wins out of 15 [including 4 from 4 in Europe and doubles over teams like Exeter and Munster] without being well prepared.  I mentioned the stingy defence already and our 34 points didn't put themselves on the scoreboard, but it wasn't just the tactics that impressed on the day, it was the way the 15 men in blue seemed so match ready from the kickoff."


Guinness Pro14 Conference B at the end of December