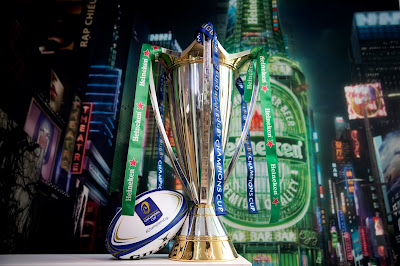 Heineken® has announced it will return to the pinnacle of European Club Rugby with the headline sponsorship of the prestigious European Champions Cup. The new agreement with the tournament’s organisers, European Professional Club Rugby (EPCR), will see Heineken®, the world’s leading international premium beer brand, once again become the main partner of rugby’s leading European club tournament.

As part of the new four year deal starting from the 2018/19 season, the tournament will be re-named the ‘Heineken® Champions Cup’. It will add to Heineken®’s wider rugby portfolio, which also includes the Rugby World Cup 2019 sponsorship. Heineken®’s relationship with EPCR, dates back to 1995 when the two joined forces to launch this well renowned club competition.

Maggie Timoney, MD, HEINEKEN Ireland said: “It is an exciting time for Heineken® to return as the main partner to the European Rugby Champions Cup, especially here in Ireland, given the recent success of the Irish teams”.

Hans Erik Tuijt, Global Sponsorship Director, HEINEKEN, said: “The expansion of the tournament to emerging rugby territories (Bilbao 2018) and new cities in traditional strongholds of European rugby (Lyon 2016, Newcastle 2019) provides Heineken® with the opportunity to create engaging fan experiences, and brings our association with rugby to new audiences throughout Europe. Heineken® is proud to have had a close association with rugby for over 20 years and we look forward to working alongside EPCR to provide a platform to continue to develop the competition across Europe and beyond.”

In line with the brand’s portfolio of global sponsorships, such as Rugby World Cup, UEFA Champions League and Formula 1, Heineken® will use the partnership as a powerful platform to communicate the Enjoy Heineken® Responsibly program.

Vincent Gaillard, EPCR CEO, said: “We have substantially developed the Champions Cup over the past four seasons and it is fitting that at such an exciting time for the tournament, we welcome back a world-leading brand in Heineken®. They are steeped in rugby history and inextricably linked with the heritage of European club rugby and we are delighted to be embarking on this journey with their full support.”

The Heineken® Champions Cup in 2018/19 will be broadcast free to air in the UK, Ireland and France, alongside a host of official international broadcasters, producing the biggest TV audience in the history of the European Club Rugby competition.