With 500 Days To Go, Excitement Is Soaring For The 2019 Rugby World Cup 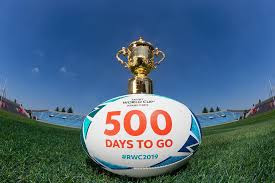 As we crossed the "500 days away" mark for the 2019 Rugby World Cup, the country of Japan has been proudly boasting about its incredible preparations to host this monumental in their homeland.

Their efforts to prepare the country's infrastructure and playing locations for the event has been termed the "Asia 1 Million legacy project," with said projecting enlisting upwards of 500,000 participants.

Asia Rugby, a World Rugby affiliate association, has also pitched into the country's Asia 1 Million project, having previously invested in other projects in other countries like the Philippines, Pakistan, Indian, and China, over the past-year plus. Their investment goals in Asia continue to grow past this year.

Meanwhile, the "Land of the Rising Sun" couldn't be more proud of how things are going in their own preparations. Excited by the huge surge in global and even domestic demand for tickets to the 48 matches that will span six weeks, he country has already been hosting "test events" of sorts, to see how their stadium conversions will hold up for these events. As an example, they recently hosted a test match of sorts, where 14,500 fans watched Teikyo University take on Meiji University, to see how the renowned Sapporo Dome -- in which the match would played -- would hold up, with it having been  converted from a baseball stadium.

The Japan Rugby Football Union, in collaboration with a conglomerate of 12 other rugby schools, government entities, and host city unions, are putting on 155 days worth of rugby events designed to introduce the game to children all over Japan. In April of 2018 alone, 100 of said rugby introductions had already taken place, showing the level of frenzy that's already taking place.

As one would expect, the spotlight around this event has created a tremendous amount of momentum around growing the game's popularity around the world. World Rugby has already set a lofty goal of influencing over one million players in the continent of Asia alone, over the next two years.

Want a great way to interact with the 2019 Rugby World Cup? Check out goldenslot.

Demand for the first World Cup to take place in the population-dense continent of Asia has, understandably skyrocketed. The early phases of ticket releases has already garnered over 1.2 million applicants for said tickets, spread out from fans across 100 different countries.

Capitalizing on this demand, Mastercard -- who is an official WorldWide Partner of Rugby World Cup 2019 -- has created its own promotions, where owners and users of said card who apply for tickets using this form of payment would actually be entered as a double-entry, thus improving their odds to receive a ticket for this highly anticipated event.

For those who can't travel to the Orient to watch these games in person, World Rugby is actively promoting several social media campaigns leading up to next year's big event. Fans all over the world are asked to use the #FindRugby hashtag when posting images of oval-shaped objects that resemble rugby balls. Further, mentioning both #FindRugby and #500DTG (short for "500 Days To Go") when posting to Facebook, Twitter, or Instagram will also allow fans to enter for potential tickets to the event.